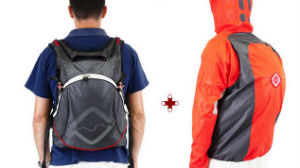 At Cyclo there isn’t a week that passes without an entrepreneur contacting us about their latest kickstarter project – some are extraordinary, some extraordinarily misjudged. We wanted to share the latest to cross our desk though because Hong Kong-based Italian designer Stefano Mangini might (just might) be on to something…

His patent-pending Funnel is a combination backpack and jacket that has already raised almost $30k (Ł18k) of the required $43k to really get this flying. The jacket, which unfurls from the backpack in a pleasingly James Bond fashion, is made with high performance fabric that is both water repellent and breathable and the pack itself looks styling and brimming with features. Lots of attention to detail here – like the fact that the jacket storage pouch is laminated so that it can be stored even when wet.

As always with Kickstarter there are a host of ‘pledge’ options (with varying rewards) with the Funnel funding ranging from $1 to $3,000. Further details on Mangini and the Funnel – and of course the chance to help fund – at kickstarter.com 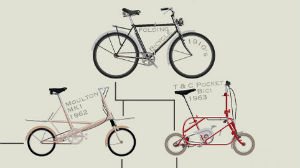 Wyatt9, a Nottingham-based bicycle design duo, have launched a new Kickstarter project. The Comprehensive Guide to the Bicycle is the young company’s most ambitious work to date, a digital illustrated print that tells the story of the bicycle from its humblest origins, right through to present day.  Having spent many hours illustrating each of the bikes in the print, Andy and Felicity, the couple behind Wyatt 9, felt the funding they could get through Kickstarter was the best way to launch the print, and reach the goal to make the minimum print run. Those who contribute to the project, or backers are being offered the chance to own a copy of the new print in addition to a whole host of other options, from owning a T Shirt of the final design, to helping decide which bikes have, so-far, been missed off the print.

Wyatt9 founder and owner, Andy Scullion says, ‘I’m hugely excited for this new project, especially because of the success we enjoyed with our last one. We wanted to tell the story of the bicycle from when it all began to now and show the amazing changes that have taken place. The funding we could get through Kickstarter allowed us to take the risk, and really put the time in to researching the bicycles history, and ensuring the illustration of each of the bikes featured is incredibly detailed and unique.’

Details of the The Comprehensive Guide to the Bicycle can be found on Kickstarter and details of more from Wyatt9 here.