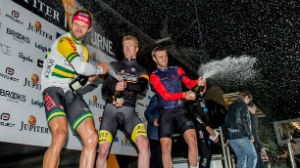 The ninth edition of the Jupiter London Nocturne has been hailed as the best yet with the reversed circuit providing plenty of drama and excitement in the men’s and women’s elite races and thousands of spectators packing the streets of Farringdon.

Team JLT Condor rider, Ed Clancy, dipped over the line first to take the prestigious Santini Elite Criterium crown, holding off stiff competition from Steele Von Hoff of NFTO and Chris Lawless of ?Team Wiggins, who were almost neck and neck with him to the line.

in the Schwalbe Elite Women’s Criterium race, Pearl Azumi Sports Tours International rider Katie Archibald reigned supreme with a destructive display of power that also gained her the Combative Award for the most aggressive performance of the night. Eileen Roe of team Wiggle-Honda was in hot pursuit, closely followed by Team Giordana Triton rider, Nicola Jupiter.

Aside from the elite races, the event also played host to a penny farthing race, the F&F Folding Bike ?Race and the Santander Cycle Hire race. James Pope, organiser of the Jupiter London Nocturne commented: ‘Every year we try to build on and improve the racing somehow and this year for the first time we reversed the circuit. The change in layout made sure that the racing was super charged and exciting for the fans. Congratulations to the winners and thank you to everyone that took part and came to watch.’

Can’t wait? Watch the trailer below: 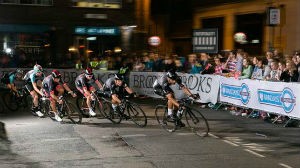 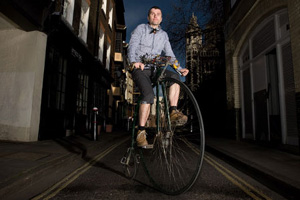 Here’s a date for your diary if you’re looking for something a little more out of the ordinary. The IG Markets London Nocturne (June 11) which takes place around London’s historic Smithfield Market area has added yet another twist to its usual mix of Elite Criterium and family friendly showmanship (folding bike race, longest skid…) in the form of their inaugural Penny Farthing race. The event, sponsored by heritage saddle and bag manufacturers Brooks England, will break down in to a 1mile sprint race and the Brooks Ordinary Trophy which will be decided over a period of 30minutes, plus 5laps. Nocturne founder James Pope is clearly enthusiastic about the addition, “We try to introduce a new feature race each so we jumped at the chance to include Penny racing in the programme. There is an established Penny Farthing community across the world and we will have competitors from USA, Europe and even Tasmania travelling to London to race.” Go on, you know you want to…

Full details and entry opportunities can be found at www.londonnocturne.com