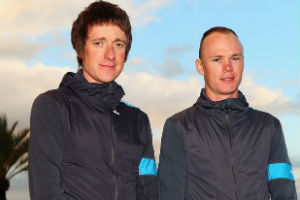 It has been announced that Sir Bradley Wiggins and Chris Froome, who finished first and second for Team Sky at the 2012 Tour de France, will begin the 2013 seasons at the Mallorca Challenge and Tour of Oman respectively. Wiggins will surely be hoping for better weather than last year when the final day of Mallorca was cancelled due to snow, whilst Froome, who begins his campaign a week later in Oman, is expecting his teammate to join him, although this has yet to be confirmed. The likely race programmes, announced by Team Sky’s Head of Performance Support Tim Kerrison yesterday, are subject to change but should see Froome head off to tackle Tirreno-Adriatico (March 6-12), while Wiggins returns to the Volta a Catalunya, which runs March 18-24. With the details of each rider’s schedule still being refined, Froome will take advantage of further training camps before competing at the Criterium du Dauphine (June 2-9) – a race the team has won for the last two years. Both riders will line-up at the Tour de France, which begins on June 29.