Movistar’s Nairo Quintana has won his first Grand Tour with victory at the 2014 Giro d’Italia, finishing two minutes 58 seconds ahead of Rigoberto Uran (Omega Pharma – Quick-Step) in the general classifications. Astana’s Fabio took third overall on +4:04″. Luka Mezgec (Giant-Shimano) was the winner of the final stage of the Giro – 169km, Gemona del Friulli to Trieste – with a time of 4:23:58, holding off Trek’s Giacomo Nizzolo into second (on the same time) and Garmin’s Tyler Farrar into third.

Commenting on his momentous victory Quintana said: ‘It’s one of the happiest days in my life. I always dreamt of winning a Grand Tour and now it’s become real. Thanks to my team, my family and all the people that supported me, this is now achieved. I wasn’t expecting at all to see so many Colombians in Trieste today. It was amazing to see so many flags through the circuit and around the podium. I’m super proud of my country.’ Reemphasising his patriotism he added: ‘This generation of Colombian riders like me – we’re showing the world, since some of us came to Europe in 2012, we can win stages, important races, we show our quality – yet today’s win is a huge reality, another big success…’

Quintana had not been expected to compete in this year’s Tour de France, despite finishing second to Chris Froome in 2013, although victory at the Giro may now change Movistar’s plans. 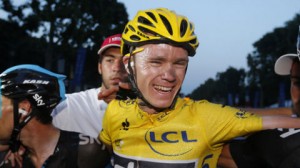 For the second year in a row Britain has a winner of the Tour de France with Chris Froome taking a decisive victory on the 100th edition. Kenyan-born Froome took – and maintained – the yellow jersey after winning Stage 8, the summit of Ax 3 Domaines, winning two further stages for good measure, the fearsome climb of Mont Ventoux (stage 15) and the 32km Time Trial Stage 17.

In a twilight finish on the Champs-Élysées Mark Cavendish was denied a fifth consecutive Paris stage win, edged out in a final battle between Germany’s Marcel Kittel and Andre Greipel – with Kittle taking the stage by mere inches. Due to the late finish in the French capital a victory lap was out of the question for Froome and his Team Sky teammates, with the TdF winner electing to forgo more than a minute of his overall margin to drop back and cross the line arm-in-arm with his team.

The usually stoic Froome took to the podium besides second placed Nairo Quintana (Movistar) and third placed Joaquim Rodriguez (Katusha) to make an emotional speech dedicating the win to his late mother. ‘Without her encouragement to follow my dreams,’ he said, ‘I would probably be at home watching this event on the TV. It’s a great shame she never got to come and see the Tour. But I’m sure she would be extremely proud if she was here tonight.’

Froome continued, ‘This amazing journey would not be possible without the support I’ve received on and off the bike. I’d like to thank my teammates who have buried themselves day in-day out, throughout this Tour to keep this yellow jersey on my shoulders. And the Team Sky management, for believing in my ability and building this team around me. Thank you to all the people who have taken their time to teach and mentor me over the years, to get me into this privileged position.’