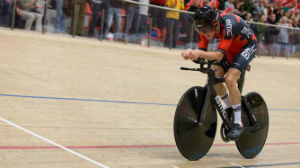 As the number of riders committing to attempt the one-hour record grows, 24-year-old Rohan Dennis has become the latest – and the first Australian – to claim glory. Dennis, a member of the BMC road team, and a silver medalist at the 2012 Olympic Team Pursuit and 2011 Team Track Pursuit World Champion set a distance of 52.491km beating the 51.852km set by Austrian Matthias Braendle last October.

Commenting on his success the Adelaide rider said: ‘There was a lot of pain, I couldn’t really enjoy it too much to be honest, I knew it was 208 laps and when I went past 208 it was just go as hard as you can… It’s a great event and hopefully that record stands for a little while.’ Confidence in that record having any longevity may however be precarious as a queue of new challengers – including Fabian Cancellara, Tony Martin, Alex Dowsett and even Bradley Wiggins – await their turn.

Dennis’s successful attempt at the one-hour record took place at the Velodrome Suisse in Grenchen; the 250m track, constructed from the highest quality, slow-growing Siberian spruce, is considered the fastest in Europe.

Previous record holders in the event, first staged in 1893, include cycling giants Fausto Coppi, Jacques Anquetil, Chris Boardman and, of course, Eddy Merckx. Merckx called his hour record attempt in 1972 as: ‘The hardest ride I have ever done.’