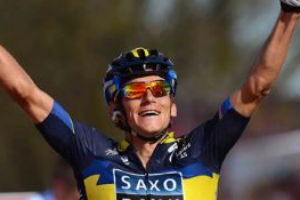 With the spring classic series moving from the French/Belgian cobblestones to the undulating terrain of Belgium and southern Holland, Saxo-Tinkoff’s Roman Kreuziger took victory yesterday at the Amstel Gold – the first of this week’s three Ardennes Classics. Holding off fierce competition from double race-winner Philippe Gilbert (BMC), Joaquin Rodriguez (Katusha) and Canondale’s Peter Sagan, Kreuziger won the 251km race from Maastricht to Valkenburg in 6h 35’21”, 22 seconds ahead of second-placed Alejandro Valverde and third-placed Simon Gerans          .

A jubilant Kreuziger said, ‘…we were in a good position to achieve our goal. The whole team did an excellent job out there and I was fully prepared for the finale and I was feeling strong all the way. On the final climb of Cauberg, I just looked down and pedalled without thinking so much. I’m really happy about this win and it goes to the whole team for a job well done.’ Philippe Mauduit, Team Saxo-Tinkoff DS, Philippe Mauduit added, ‘It’s one of those days where everything just come together perfectly. The rider has each been given an assignment and every one them does his job.’

The invariably hilly action continues this week with the Flčche Wallonne (The Wallonne Arrow) on Wednesday, April 17, and Ličge-Bastogne-Ličge – one of cycling’s oldest events, dating back to 1892 – concluding things on Sunday, April 21. Although nothing officially connects the three races of the Ardennes Classics, they are often considered collectively – only two riders have ever won all three in a single year to claim ‘the triple’: Davide Rebellin in 2004 and Philippe Gilbert in 2011.