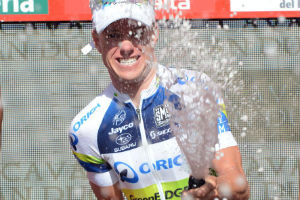 ORICA-GreenEDGE has announced that 2012 Vuelta a Espańa Mountain Classification winner Simon Clarke has extended his contract with the team through to 2015. In addition to his fourth stage Vuelta win, Clarke has enjoyed a successful season with the team, finished on the podium in the Rogaland GP and taking stages at the Vuelta a Burgos and Tour of Norway with a second place in the general classification at the latter. Speaking about his decision to extend his contract with GreenEDGE the 26-year-old Australian commented, ‘Being Aussie in an Aussie team is a dream come true… I think I made a big step up this year, and in part, that’s because of the support I’ve received from this team. To have the chance to stay here for at least another three years is perfect for me.’

Clarke’s decision to extend would appear to be as much about his respect and fondness for his teammates as his management – saying, ‘The thing about Aussies is that we’re all really good at having fun. We work hard and we enjoy ourselves at the same time. The international guys have adopted that mentality. Most first year teams need a year to iron things out. We’ve hit the ground running. It’s been such a fun year.’