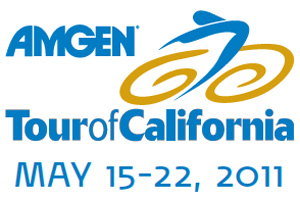 Despite an event initially beset by meteorological turmoil – with the cancellation of the Lake Tahoe first stage and delay and alteration to the start of Stage 2 due to unprecedented freezing weather – the 2011 Amgen Tour of California has provided 8 blistering days of competition. Yesterday (May 22) whilst Matthew Goss (HTC-Highroad) took the final stage, it was Chris Horner of Team RadioShack who finished with an overall time of 23:46:41 to take the leader’s jersey and confirm his place at the top of the podium. At the grand old age of 39 Horner becomes the oldest rider to win the event in its six year history. Meanwhile Team Garmin-Cervelo took the overall Team Competition for the second year in a row, helped by Thomas Danielson’s final stage third place achievement.