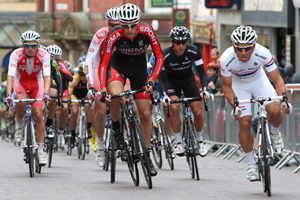 One of the most popular and eagerly anticipated cycle races in the UK reached its thrilling finale in Preston yesterday (Sunday, August 7), as the fifth and final round of the British Cycling Elite Circuit Race Series took to the streets of the city centre. Although Endura Racing’s Ian Wilkinson was the winner of the final race of the series it was Dean Downing of Rapha Condor Sharp – who finished 8th – that was celebrating victory as the overall winner of the five-race series. Hannah Barnes of Motorpoint retained her National Circuit Race Champion jersey as she took top place in the British Cycling Women’s National Circuit Race.

The series takes place in five towns and cities across the country (Otley, Stafford, Abergavenny, Colne and finally Preston) from June to August, with competitors sprinting around town or city centre circuits at speeds of up to 40mph. One of the unique selling points of the seres is that they are free to watch and bring competitors close to the action.