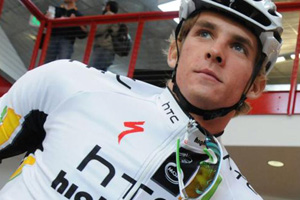 Patrick Gretsch and twins Peter and Martin Velits have all officially announced their departure from troubled team HTC-Highroad amidst rumours that Mark Cavendish is set to follow. Team owner Bob Stapleton has yet to secure a headline sponsor for his operation and his deal with the HTC Corporation (the Taiwanese manufacturer of smartphones) is set to expire at the end of the season with no view to renewal.

Whilst Cavendish is remaining coy about his choice of move (or otherwise) the Slovakian Velits, both considered rising stars, will be moving to Quick Step and Gretsch – a double U23 time trial world champion who only rode his first grand tour at this year’s Giro – will be peddling for the Netherlands-based Skil-Shimano.