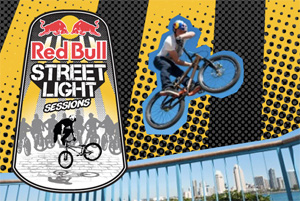 YouTube Street Trials legend Danny Macaskill is switching small-screen drama for real-world action as he takes to the streets in September and October for the Red Bull Street Light Sessions. The events, which take place in Bristol on September 17 and Manchester on October 8, are a chance for trials enthusiasts of all ability to join Macaskill in a master-class of urban cycling in specially designed and developed city-night setups that are intended to challenge all comers.

Macaskill will be joined by World Champion Trials rider Martyn Ashton, whilst kit and gear will be provided and supported by Inspired Bicycles. The closing date for applications to ride in Bristol are Monday September 12, and for Manchester October 3 – for more information on watching the action and for a last minute opportunity to book a place for one of the Street Light Taster Sessions visit redbull.co.uk/streetlight