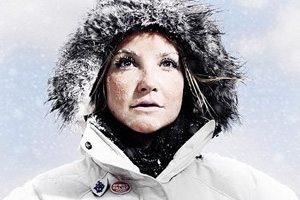 She’s successful walked the high-wire between the chimneys of Battersea Power Station, paddled the length of the Amazon and completed the Namibia 24hour Ultra-Marathon (one of the toughest footraces in the world) so when Blue Peter presenter Helen Skelton announces she’s going to cycle to the South Pole, there’s little reason to doubt her. The epic 500 mile trek across Antarctica, scheduled for January, will see the 28-year-old use a combination of skis, kites and ‘ice bike’ (with specially adapted 8inch-wide tyres) to reach her destination in order to raise money for the Sports Relief charity.

Along the way it is anticipated that she will break the world record for the longest bicycle journey on snow, whilst travelling up to 14 hours a day (pulling an 82kg sledge) and facing temperatures around -50C. Speaking on BBC Breakfast Skelton admitted that the bike was really as-yet untested and when asked how did she know it would work, she replied, “Well we don’t…it might not work, but wouldn’t it be brilliant if it did!”

For more details on the challenge and to sponsor Skelton in her efforts, visit: www.sportrelief.com