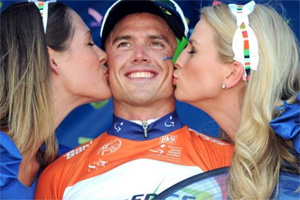 Something of an Australian celebration is (probably still) going on ‘where the women glow and the men plunder’, with the UCI World Tour curtain raiser, the Santos Tour Down Under seeing a fairytale winner in the shape of local lad Simon Gerrans. The win was made all the more party worthy by the fact that his GreenEDGE Australian professional cycling team are a fledgling operation (Australia’s first pro outfit) taking their debut ride. Gerrans though is no stranger to success having previously won the Santos Tour Down Under in 2006 whilst riding for Ag2r Prevoyance; he wore the Ochre Leader’s Jersey in Stage 6 this year and, with the support of his GreenEdge team mates, did more than enough to be crowned the 2012 champion.