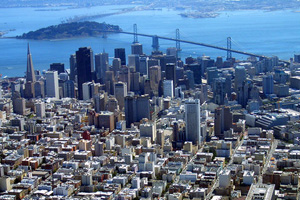 US statistics suggest that between 1999 and 2009 (the last year for which figures are available) 4,834 cyclists and 59,925 pedestrians were killed by motor vehicles, whilst in the same period cyclists were responsible for the deaths of 63 pedestrians.

On March 29 in San Francisco (which ranks fourth behind Portland, Minneapolis and Seattle for cycling commuters) 36-year-old Chris Bucchere, travelling at an estimated 35mph, ran a red light and hit 71-year-old Sutchi Hui, leaving him with injuries that would kill him just a few days later. What makes this latest tragedy – the third such death in the city within a year despite the low national statistics – is that last week the San Francisco district attorney, George Gascón, announced plans to charge Bucchere with ‘felony vehicular manslaughter for reckless riding that resulted in the death of a pedestrian.’ Although there appears to be no data on the precedent for this, it does appear that this may be the first such felony charge.

Despite its challenging terrain San Francisco has seen a 71% increase in cycling in just five years and the case has clearly sent ripples through a community that has taken two wheels to heart. Whilst Bucchere’s lawyers issued a statement making clear that he had voluntarily turned himself in to the police and ‘…is cooperating with the investigation,’ the DA has said that a sentence of up to six years is not out of the question, adding, ‘I’m hoping this case serves to raise awareness for everyone that the rules of the road apply to everyone…’