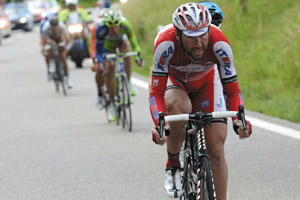 Yesterday (June 14) saw an impressive win for Vladimir Isaychev – the first of his pro career for the Team Katyusha rider – on the fifth stage of the Tour de Suisse. The 28-year-old Russian from Samara secured his win across the 192.7km stage from Olten to Gansingen with an epic final sprint between six riders that ultimately saw victor for Isaychev and forced Ruben Perez (Euskaltel) into second and Team Sky’s Salvatore Puccio into third. Speaking post-race a clearly jubilant Isaychev commented, ‘I felt in a great shape during the whole stage, and my motivations were high because I knew that, in a sprint against the riders which were in the breakaway with me, I was the favourite. And, in fact, I managed to win quite easily. Really, it was a great day for me: I’ve always imagined my first victory in pro races, but I would have never thought of such a great win.’