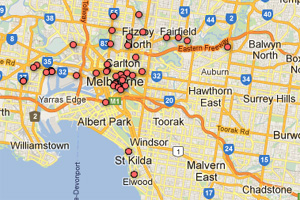 Australia’s Green party have continued to roll out their Bike Blackspot campaign and interactive map with the extended launch to Melbourne of their increasingly popular Bike Blackspot App. It gives cyclists armed with smartphones a tool to warn other riders of a variety of risks from continuing road dangers to cycle path potholes whilst also sending the information to Transport and Roads Minister Terry Mulder and his federal counterpart, Anthony Albanese.

A potentially powerful lobbying tool (in a time when cycling projects are facing severe cutbacks) the app also allows users to ‘dob in’ dangerous drivers and even nominate ‘cycling utopia areas’. The earlier Perth version of the app, established by Greens transport spokesman Senator Scott Ludlam back in March, has already identified 250 black spots in the West Australia capital and it is hoped that the Melbourne initiative will prove similarly popular. Feedback either from the app or via email is all forwarded to the Victorian Transport Minister and Greens MP Greg Barber, who is campaigning to reverse the Victorian Governments bike funding cuts.