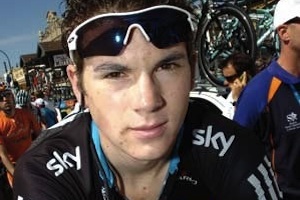 Day two of the Vuelta a Espańa has seen mixed results for Team Sky; Chris Froome, runner-up last year, only managed a 29th placing, saying: ‘Coming so soon after the start, this climb won’t decide who’s going to win the race but we’ll start to see who could lose it.’

Better news though for team-mate Ben Swift who finished third in the second stage in a sprint finish won by John Degenkolb of Argos-Shimano. Clearly delighted with what he regards as a breakthrough win in his first major tour the the young German commented, ‘A finish like that called for pure power, which is what suits my kind of racing, not just speed, and after team-mate Koen De Kort had dropped me off with 200 metres to go there was just me, Davis and Swift up there for the sprint… It’s great to get a win so soon for the team. We came here looking for just one victory and now we’ve got that in the bag the pressure is off. Maybe more will come after these next two mountainous stages.’

On the hilly second stage from Pamplona to Viana, which was run in temperatures soaring into the high 30s Celsius, the Spaniards Javier Aramendi and Javier Chacon and the Russian Mikhail Ignatyev went clear in the first hour. After Chacon dropped back with 30km to go, the overall contender Alberto Contador of Spain made a surprise dash at an intermediate sprint to snatch a two-second time bonus. ‘I thought I might as well try for it. It wasn’t too much effort and I was in a good position anyway,’ the leading Vuelta favourite said.

Spain’s Jonathan Castroviejo of the Movistar team remained the overall leader. Monday’s third stage will be the first summit finish of the race, on Mount Arrate in the Basque Country.