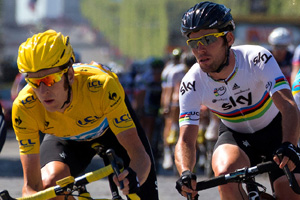 Team Sky has announced that both Bradley Wiggins and Mark Cavendish will be amongst the riders making up the squad at the upcoming Tour of Britain, which starts in Ipswich on September 9. The TdF and Gold-medal-winning Olympian will lead the team, flanked by World Champion Cav (who won two stages of the ToB last year) who in turn will be relying on the ever-excellent Bernhard Eisel to help launch the Manx Missile during the crucial sprints. Germany’s Christian Knees, Sweden’s Thomas Lofkvist and two-time British National Road Race Champion Jeremy Hunt complete the team.

Team Sky’s race director Mick Bennett said: ‘To have the reigning Tour de France and Olympic time trial champion, and the current world champion competing in The Tour of Britain is a dream for us… We are delighted that The Tour of Britain will be the first chance for many British fans to see Bradley Wiggins since his Tour de France and Olympic successes. We are also very pleased that Mark Cavendish will do the race again so he can show off the rainbow stripes in front of home fans.’