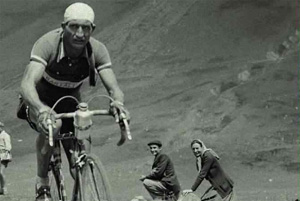 Gino Bartali was born into near poverty in rural Italy on the eve of the First World War, yet rose to become one of the greatest names in European cycling, winning the Giro three times – 1936, 1937 and 1946 – and the Tour de France twice, first in 1938 and again in 1948 (the largest ever gap between TdF wins.) But this is not the only focus of ‘Road to Valour’, written by brother and sister Aili and Andres McConnon, because Bartali was also a war hero, secretly aiding the Italian Resistance and in so doing becoming a national hero…

The full title of the book is the exhaustingly long ‘Road to Valour: Gino Bartali: Tour de France Legend and Italy’s Secret World War Two Hero’ and here, we feel, the problems begin (not least because Cyclo never trusts a title with more than one colon…)

The McConnons recount the story in minute detail; ten years of research calling on first hand interviews with family members and team mates and dialogue culled from newsreels, papers and Bartali’s own writing. They are at pains to point out that the book is not a work of fiction; an ascertain they probably feel obliged to make because their often florid prose reads like an historic novel of lurid proportions. Their manner is likely to divide readers; a Marmite style that will either carry you along with the drama or distract you in an avalanche of over-wrought phrases and laboured similes. The fact that the book really falls between two stalls (outright drama and serious academic history) is never more evident than in the approach they take to footnoting their text – more than 50 pages of suffix notes are contained but not a single one is easily approached because none are referenced in the main body, leaving you trying blindly to find out where a quote or fact may have come from. It smacks, in short, of uncertainty.

A shame then as Bartali’s story is a fascinating and, indeed, important one. As a cyclist few have equalled his meteoric rise (certainly in the face of such social and political adversity), and as a war hero – a sort of Italian Oskar Schindler if you will – his bravery and moral integrity are truly inspirational. If you can get beyond the McConnon’s bombastic hyperbole an excellent read lays beneath.