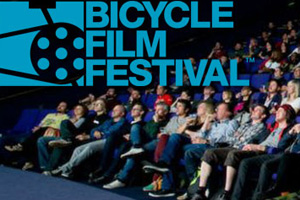 Like bicycles? Like films? There’s a good chance then that the Bicycle Film Festival is for you. Running from October 4-7 at London’s Barbican Centre the fully loaded schedule of screenings has something of every stripe from quirky short dramas (including ‘Boy’ by Justin Chadwick, which Cyclo featured back in April) to bike-based music videos and documentaries. Also on show will be Dani Jariod’s ‘The First Unstoppable’, a prelude to his feature documentary ‘Unstoppables’ due for release next year (see Cyclo’s interview with Jariod and exec producer Richard Galvani here.)

The festival, which now plays around the world from Mexico City and Madrid to Cape Town to Vienna, was the brainchild of Brendt Barbur who wanted to turn the (very) negative experience of being hit by a bus while riding his bike in New York City into something positive that explored all-things two-wheeled. Now more than a decade old the intension remains the same: to be ‘…a platform to celebrate the bicycle through music, art and, of course, film.’

Tickets for London range from Ł6.00 to Ł11.50, with full details at www.bicyclefilmfestival.com