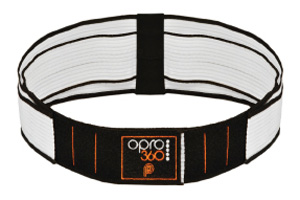 We hope we’re not getting to ‘sciencey’ here, but breathing relies on muscles. And like the other muscles of the body, those involved in respiration can be trained to maximise their efficiency. For years now the major player in training these muscles has been the Power Breathe (powerbreathe.com) and its imitators, small handheld devices that look not unlike a ventilator and which rely on slowly increasing the ‘load’ or resistance across a program of daily breathing exercises. Now there’s a new kid on the block which could go head to head (lung to lung?) with the Power Breathe…

Developed by Progressive Sports Technologies, based at the Sports Technology Institute at Loughborough University, the RespiBelt is, to put it in reductive terms, an elasticated belt that attaches just below the pectorals or breast and can be adjusted with Velcro webbing to increase or decrease the resistance on breathing. The unique selling point here is that, unlike the Power Breathe, it can be used during training sessions on the bike (or indeed run) to deliver results in tempo with whatever workout you already had planned.

In terms of use, things couldn’t really be simpler: line up the tabs with the marks on the Velcro webbing to increase or decrease the level of additional workout and slip the belt on; then just cycle or workout as usual whilst the RespiBelt does its thing. Gradually increasing the load over several weeks (which is recommended for maximum benefit) means that the device never feels constrictive and on testing Cyclo noticed tangible results within ten days. There seems to be a wealth of credible science behind the RespiBelt (lots to be found and pored over at respibelt.com) and testimonials seem to be coming thick and fast – Mo Farah’s pre-Olympic training regime included its use and even at less elite levels we can certainly see the benefit.

Available in five sizes – XS to XL – and, whilst not cheap at Ł59.99, adding this to your bag-o-tricks means effective exercising of muscles essential to cycling but all too often neglected. Full details and online purchase at respibelt.com