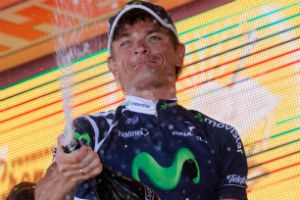 Team Sky have announced the signing of Movistar’s Vasil Kiryienka on a three-year contract. A pro since 2007 Kiryienka comes with a solid reputation for both hard work and versatility, showing strength as a climber and no slouch when it comes to the time trials. This year saw the 31-year-old Belarusian hit his ninth Grand Tour appearance (at the Tour de France) before going on to take bronze at the World Time Trial Championships in Limburg.

Team Sky’s Sports Director Nicolas Portal commented on the signing: ‘Vasil has won some big races and put in some impressive performances at the very highest level. His stage win at the Giro d’Italia last season was phenomenal, and we were all impressed with the way he was able to battle on and take the victory… He can perform very highly in his own right, or in a team capacity, and we know what he is capable of. It puts us in even better shape heading into the big tours of 2013.’