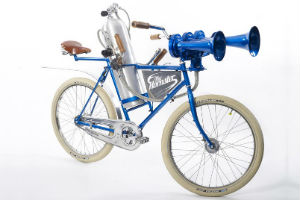 Having recently reviewed The Hornet which at dB140 is purportedly the loudest cycle horn on the market (read our review here), Cyclo was amused to see that news of the Hornster’s existence (an ear-bending dB178 device) was doing the social media rounds again despite almost certainly being a joke.

Constructed from an Airchime KH3A from an American locomotive and powered by an adapted scuba diving tank, The Hornster was designed by Yannick Read – creator of the world’s smallest caravan no less. But given that it first surfaced on the website of Environmental Transport Association (ETA, an environmental insurance and breakdown service) to highlight the dangers that cyclists face on city roads, we don’t really give its commercial existence that much credit, especially when you take into account the Ł4,995 price-tag. Still, that didn’t stop Wired Magazine picking up on the story (or, at a stretch, being in on the joke.) Take a look at the video below and make your own mind up and if any of our readers actually own one we’d love to hear from you and stand corrected about its authenticity.