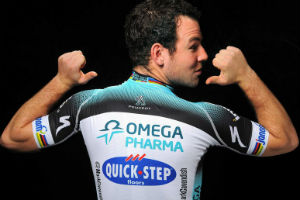 Mark Cavendish has taken his first outing in the official Omega Pharma-Quick-Step jersey, with a 90minute spin through the hillsides of Tuscany, where he had spent the closing days of 2012 with family and friends.

Speaking afterwards Cav, who joins Omega-Pharma after a season with Team Sky, said, ‘It was a nice ride, and I was enthusiastic about officially wearing my new kit. The heritage of this team is incredible; it’s been around since 2003. I’m proud to wear this jersey that Tom (Boonen) and the other guys on the team have made unique in the group. Now I, too, want to contribute and feel like this jersey I’m wearing is even more my own.’ Cavendish will join his teammates for a training camp in Spain, from January 6 to 13, before commencing the serious business of racing for his new team.