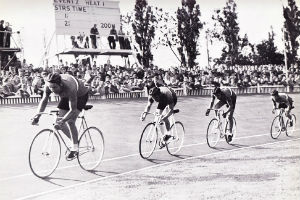 Cyclo is delighted to learn that work on phase two of regeneration of the legendary Herne Hill Velodrome has begun following the Herne Hill Velodrome Trust’s successful funding application via the Southwark Council Olympic Legacy Fund. Herne Hill is the last surviving venue from the 1948 London Olympics and has been the proving ground of innumerable British champions; the latest developments will see the building of a 250metre junior track, perimeter floodlights and hard standing within the track’s centre for activities such as Bikeability training. It is expected that work on the junior track – which will sit within the historic main track – will be complete by mid-March in time to stage the venues renowned Good Friday meeting which was first run in 1903 and has seen the likes of Graeme Obree and Bradley Wiggins compete.

The long-running campaign to save and ultimately regenerate the Herne Hill Velodrome was given a significant boost in 2011 when British Cycling negotiated a commitment from site owners, the Dulwich Estate, to ensure its future. The deal allowed British Cycling to channel both funds and technical support into the project, which should ultimately see the complete restoration to track, grounds and grandstands.

For further information on the Herne Hill Velodrome see hernehillvelodrome.com, for details of British Cycling’s involvement see britishcycling.org.uk and for details of how you can get involved (much help still needed) visit savethevelodrome.com