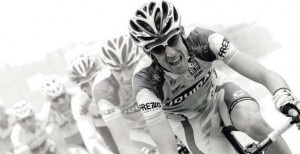 The domestique. You’ve seen them. In the pack, working away. But possibly those who casually watch the big road races or dip in and out of coverage of the likes of the Tour de France consider riders hung back in the peleton as merely the ‘also rans’; tough riders, no doubt, but simply without the gift or grit of Wiggins, Contador, Nibali, et al. Not so – or at least a massive oversimplification of affairs – as the domestique is a very special breed of rider and one man who knows every detail of their life is Charly Wegelius. A professional for more than a decade with some 14 Grand Tours to his credit, Wegelius’s book Domestique, The True Life Ups and Downs of a Tour Pro lays bare the true struggle of life on the circuit and demystifies much of cycling’s inner machinations.

In his opening chapter, Prologue (natch), Wegelius says. ‘What is it to be a great cycling champion, I will never know. What I can tell you is what it is to race bicycles for a living’. And so he does, but this is typically self-deprecating – possibly just modest – of Wegelius. A ‘great cycling champion’, perhaps not by strict definition, but a great Domestique? Absolutely.

One of the finest achievements of this book is in defining the role of the domestique – ‘…to protect a rider from the wind, fetching food, clothing and information from the car… to manipulate, or force, the shape of a race to change it in favour of his leader.’ At times this seems almost mundane, workmanlike, but Wegelius, with equal measure of wit and wisdom, helps the reader understand what it takes to perform this invaluable role; what it takes to be an athlete of dedication and physical prowess the likes of which us mere mortals can only dream of, but to be denied, by definition of the job, the real shot at glory.

Of course the book is also a biographical progression from cycle-mad kid in York, to driven youth and seasoned professional, and helping Wegelius’s story maintain shape and structure is co-author Tom Southam, once a pro himself, now known for his journalism in the sport. But Southam’s hand is appropriately subtle and it’s Wegelius’s tale and more importantly his ‘voice’ (with all its earthy profanities) that is allowed to shine through.

But wait. Will those looking for titillation and scandal on the drugs-front be disappointed? Is it even possible to write a cycling book – particularly one focused on the opening decade of the 21st century – to eschew a mention of doping? Of course not: part of the scene, but this is not an exposé (is there even anything left to expose?); Wegelius sets out his stall from the off: he doesn’t deny the scale of abuse but chooses not to make it his focus.