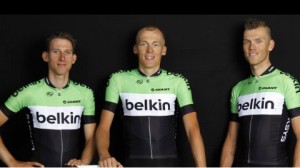 The Blanco Pro Cycling Team has announced that it has signed an agreement with Belkin, the American consumer technology firm, in a 30-month deal that will see them rebranded as the Belkin Pro Cycling Team. Blanco were formerly sponsored by the Dutch financial organisation Rabobank before they withdrew at the end of the 2012 season voicing concerns that international cycling as a whole could never really be drugs-free and ‘clean’.

Explaining the symbiotic relationship between cycling and tech, CEO and founder of Belkin, Chet Pipkin, said, ‘Cycling relies on innovation to drive success and has a passionate, tech savvy fan base that follows the sport closely, which aligns really well with the Belkin brand… Associating our Belkin and Linksys brands with this successful, well-established pro cycling team enables us to introduce ourselves to millions of people around the world and interact with them.’

The Belkin Pro Cycling Team currently consists of 29 riders from five nations; Dutch rider Lars Boom, clearly relived that a new deal has been struck, commented: ‘This last period had been tough because we did not know what would happen with the team. With Belkin on board, the uncertainty is gone. I am very pleased that we can continue. I’ve been racing for some time with these guys and I’d like continue to do that. Both on and off the bike, I can get along with this group very well.’

The rebranded Belkin Pro Cycling Team will make their debut at the 100th Edition of the Tour de France, which begins in Corsica on June 29