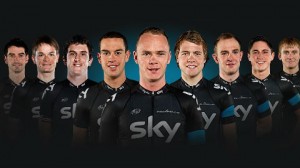 Team Sky has announced its line-up for the 100th edition of the Tour de France, which starts in Corsica on June 29. The team brings together riders from five different nations with leader Chris Froome one of four British riders in the line-up.

Aside Froome, the GB riders comprise Ian Stannard, Geraint Thomas and Peter Kennaugh, with Australia’s Richie Potre, Norway’s Edvald Boasson Hagen, Spain’s David López and Vasil Kiryienka and Kanstantsin Siutsou, both from Belarus, completing the squad. Eight of the team were together at the Criterium du Dauphine, where Froome came first and Richie Porte second.

Confirming the final selection for the Tour de France team, Team Principal Sir Dave Brailsford said, ‘Making the final selection of riders has been especially tough this year but we believe that we’ve found the right combination for the Tour de France.  We have a group of nine riders that are all in great form and ready for the challenge ahead… The Tour de France has been the main goal for Chris this season and he goes into the race in great shape. With four stage-race wins this year Chris has not only grown as a rider but also importantly as a leader.’

On the selection of the wider squad, Brailsford added, Around him (Froome) are eight quality riders who have each earned their place in the team. They will add the climbing ability and the engines to provide the perfect support for Chris, especially in the crucial mountain stages. We’ve seen what this group are capable of at the Dauphine and all have raced with Chris successfully at some stage this year.

Commenting further on the squad Chris Froome said, ‘I’m delighted with the balance in this team and every one of these riders is going to play a pivotal role once the racing begins. Most of us were at the Criterium du Dauphine and I was hugely impressed there with the way the team came together in control of the leader’s jersey. It gave me huge faith and I could not be happier with the selection.’

What happened to Rigoberto Uran [Uran]. He was the best Sky rider by a mile at the Giro. Has he got the elbow?