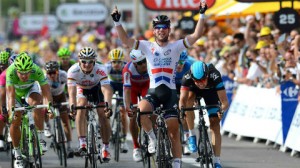 Despite the toughness of yesterday’s stage – at 228.5km, the second longest of the Tour – Omega Pharma-Quick Step clearly had more than enough left for the end; post-win Cavendish commented: ‘I usually don’t start winning until about the 5th stage of the Tour anyway. This has been pretty on the norm, but we were really motivated today. ORICA-GreenEDGE did the chasing today which was nice, for once we could sit behind and save it for the end…’

The TdF continues today with Stage 6, 176.5km Aix-en-Provence to Montpellier. For more information on the other British riders in the 2013 TdF click here.