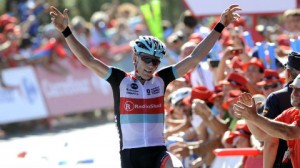 Winning Stage 3 of the Vuelta a Espańa – 172.5km, Vigo to Mirador de Lobeira – Radioshack Leopard’s Chris Horner, who turns 42 in October, became the oldest rider in the history of cycling to win a stage in a Grand Tour; beating Pino Cerami who won a Tour stage at 41 years, 2 months. Horner’s stage victory also sees him sitting atop the Vuelta a Espańa GC in a total time of 9hr 37’40”, with Astana’s Vincenzo Nibali in second and Saxo-Tinkoff’s Nicolas Roche in third.

Horner commented on the day’s action: ‘It was fantastic today. There were multiple attacks but when I looked back and saw that I had a small I gap, I just said to myself that I was going. There were so many attacks that when I finally got to the last rider I wasn’t 100 percent sure he was the last guy, but in the car they were telling me to “Go! Go!” So I went full gas to the line… It’s always a gift to win.  And when you win here with all of these world class riders, you know you are one of the best riders, too, and it’s a wonderful feeling.’

Chris Horner, showing no sign of either slowing down or retiring, despite his team contract coming to an end, added: ‘I love racing.  Everyone keeps asking me when I am going to retire, but I won’t do that until I feel like I’m just suffering all day on the bike and never winning bike races.  At this moment I feel like I can keep racing forever… Thank you RadioShack for sponsoring me and the team for four years. They stop now and also I am at the end of contract. My contract is free and open.’