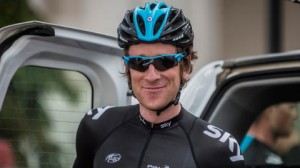 Team Sky have announced their squad for the Tour of Britain, which begins on Sunday September 15 in Peebles, Scotland. Sir Bradley Wiggins will lead the six-man squad as one of three British riders, along with Josh Edmondson and Ian Stannard, in the team’s home tour.  Austrian Bernhard Eisel, Australian Mathew Hayman and David Lopez of Spain complete the line-up.

Speaking about the Tour of Britain Wiggins said:  ‘I’m really looking forward to the Tour of Britain; it’s a race I’m fond of and it’s nice to see it growing in stature each year. The crowds and the roads make it special and it’s always very humbling to see the fantastic support that we get from the public… I’m coming into the race feeling really good.  It finishes in close proximity to the world time trial championships, which is my main late-season goal.

Fellow Brit rider Ian Stannard added:  ‘The Tour of Britain has become a massive event in the cycling calendar and I’m really excited to be racing at home… There’s a real enthusiasm for cycling at the moment – especially following Brad and Froomey’s Tour wins and the Olympics – so I’m really looking forward to competing again on British roads. We race all over the world but it’s always nice to compete in front of your home fans.  With such a high-level race in the UK naturally I want to be there.’