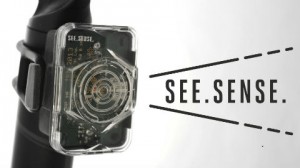 No denying that the nights are drawing in and the lights need getting out. The newly launched See Sense, currently seeking funds through Kickstarter, looks to add a dash of intelligence to the common sense of using bountiful lights on the bike. It’s USB charged, waterproof, and motion gesture controlled (so no fiddly buttons), but the intelligence bit from its ability to ‘know’ when to make you most visible to other road users. By using sensor technology to monitor the cyclist and the environment – taking into account factors such as cadence, uphill or downhill orientation, acceleration or braking, cornering lean, and yaw – whilst also factoring in light levels, the See Sense can determine when to flash brightest and fastest, reserving greatest output only for situations where it’s really needed. See Sense uses a Fresnel lens, so rather than focus the light it spreads out, minimizing dazzle to other road users and providing, say the makers, more visibility, ‘…from the side than any other light in testing.’

Lead engineer Philip McAleese has worked with hundreds of cyclists over two years to refine the product and comments: ‘My dream was to create a light that could be bright when you need it. I saw more and more commuters fitting bright off-road lights to their bikes in the quest to be seen. I was tired of not being seen too, but I knew there had to be a better way.’

See Sense is seeking Ł12,000 via the Kickstarter crowd-funding platform with an end-date of November 8. A pledge of Ł60 will get you a set of basic lights, when and if the funding goal is met. Further details at seesense.cc and kickstarter.com