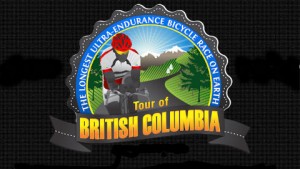 The UK certainly offers bountiful cycling challenges – some beautiful coast-to-coast routes or perhaps Land’s End to John o’ Groats? But with the best will in the world and even with much looping around and backtracking nothing comes close to the 5,100km on offer at The Tour of British Columbia.

Advertised as ‘The Longest Ultra-Endurance Bicycle Race on the Planet’, this single-stage, ‘in your face’, challenge has some terrifying/inspiring (delete as applicable) stats attached: the route climbs over 64,000m (approximately seven times up Mount Everest) with 105 cat 5 climbs, 35 cat 4 climbs, 29 cat 3 climbs, 16 cat 2 climbs and 11 cat 1 climbs all of which must be completed within 384 hours. Of course you could complete it at a ‘leisurely’ 13.4km per hour average, but only if you cycle 24hours a day; so factor in some much needed rest breaks and even the average speed starts to look daunting.

For riders unsure of tackling the full-on distance, organisers have arranged the frankly still impressive-looking BC Explorer (at 2,800km) and the ‘BC Contender’ at a mere 1,600km. But who would enter an event like this? 2014 being the inaugural staging it’s perhaps not possibly to say quite yet, but event organiser Perry Stone says, ‘My experience with ultra-cycling is that you meet a lot of amazing people from all walks of life and I expect more of that here… ultra-cycling is the Zen of bicycle racing, it attracts people who want to push boundaries and discovery how far they can go.’

A Zen-like dedication to the bike would certainly be in order; starting and finishing near the shores of the North Pacific Ocean in White Rock, BC, The Tour of British Columbia (also known as the Tour de BC) will be staged mostly on the roads of the Canadian Provinces of British Columbia and Alberta with cyclists riding through some of the most breath-taking scenery in North America. But you would think even the logistics of trying to stage an event like this (let alone ride it) are daunting. Not so, says a relaxed Perry: ‘Logistically things are not too bad because the race(s) start and finish in the same location. We tried to develop the event to lessen the logistics for the riders and their crews, which in turn lowers the expense of competing. As long as we garner the required volunteers to assist in the vast area we cover we should be good. Even though there are three routes to choose from, they all follow the same route with the shorter routes turning off and then rejoining the main route.’

Having previously worked on the Race Across America – the annual transcontinental bicycle race from the west to east coast of the USA – it was perhaps inevitable that Perry’s thoughts would turn to staging something (arguably) even greater. ‘As, essentially, a lifelong resident of British Columbia I was very familiar with the terrain and climate and thought we could put together a pretty amazing challenge,’ says Perry, ‘I began plotting routes out on various mapping programs. I found some amazing options and I began to develop the race. I love ultra-cycling as it’s made a big difference in my own life and I want to develop the sport and increase participation at all levels everywhere we can.’

The inaugural Tour of British Columbia, plus the BC Contender and BC Explorer, begins on August 3, 2014. For further details see tourofbritishcolumbia.com