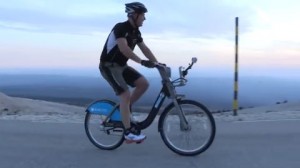 Mont Ventoux is a challenge that strikes fear into even the most seasoned of Tour de France riders – stark, wind-swept (as the name implies) and with a breath-sapping summit finish. It is the stuff of legends to pro and amateur riders alike. But none of that has stopped Rob Holden from hiring a ‘Boris bike’ and cycling the 22kg, three-speed bike to the top. Rob, aided by friends Matthew Winstone, and Ian Laurie, hired the bike from a docking station in Southwark, south London, loaded it into a van and drove, via the Eurotunnel, to the Alps. The 22km climb of the ‘Giant of Provence’ was recorded for posterity – you can see the resulting ‘Boris vs Ventoux The Film’ below – and the team returned the bike to London with only moments to spare before the 24-hour rental cut-off.

Mont Ventoux has been a stage finish for the TdF on nine occasions – most recently this year, when Team Sky’s Chris Froome claimed victory – and the race has crossed the summit on six other editions. The climb tragically and controversially claimed the life of British cyclist Tommy Simpson during the 1967 race.

Rob Holden’s epic Ventoux challenge had set out to raise Ł2,000 for Macmillan Cancer Support but, to date, has raised almost Ł7,500. Please help add to the fund at justgiving.com