Regular readers of Cyclo will be familiar with the work of Greig Leach, a one-time amateur club bike racer, who now combines his passions for cycling and painting. Previously Greig has helped illustrate action from Tour de France, the Tour of Britain and the USA Pro Challenge – now, with action in Australia dusted for another year, we are delighted to bring you his round up of the Tour Down Under… 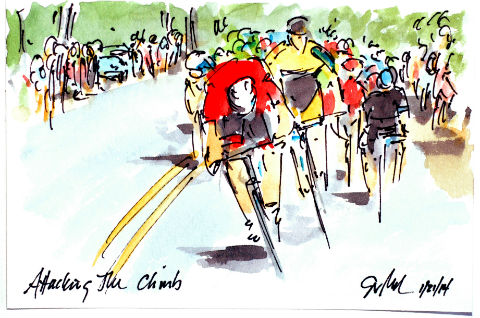 Stage 2 – ‘Flying Across the Line’ – Diego Ulissi (Lampre) celebrating his winning of the sprint in Stage 2 of the Tour Down Under. 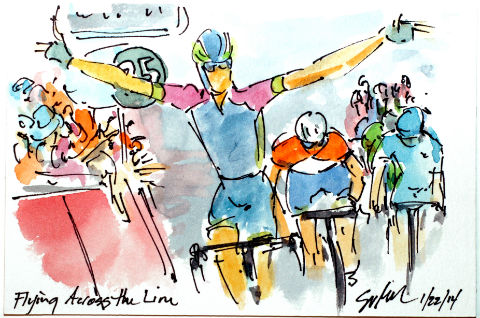 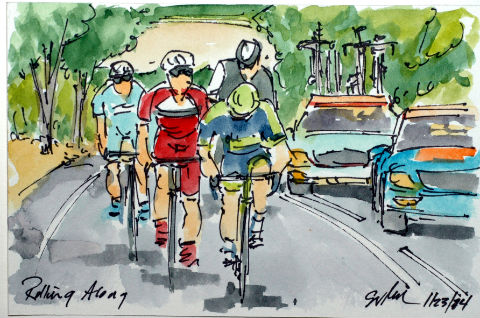 Stage 4 – ‘Make It Fifteen’ –  Andre Greipel taking his first of two stages at the Tour Down Under and setting a new record for total TDU stage wins by an individual rider. 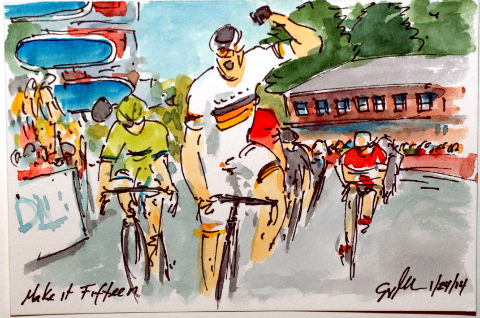 Stage 5 – ‘Why Defend? Attack’ – Cadel Evans attacks at the bottom of the second ascent of Willunga Hill.  He gambled, instead of just sticking to the wheels of Ulissi and Gerrans.

Stage 6 – ‘Bringing Home the Jersey’ – With all of the bonus seconds scooped up by the early break, Orica-Greenedge escort the Ochre Jersey of Simon Gerrans around the streets of Adelaide and up to the finishing line just behind the sprinters. 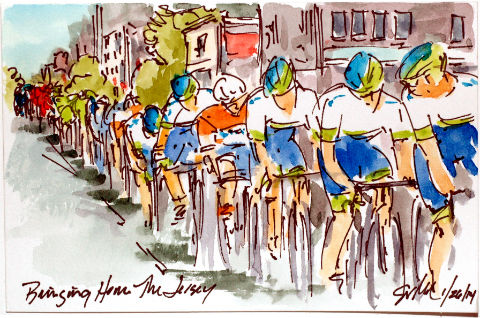 To learn more about the work of Greig Leach and for details of his substantial output see greigleach.com and also theartofcycling.blogspot.com – he is sponsored by Richeson Art, and for an overview of all the work we have featured on Cyclo (including last year’s Tour de France, Tour of Britain and the USA Pro Challenge) click here.