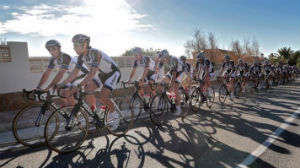 Team Giant-Shimano has announced its 13-rider long-list for the 69th Vuelta a Espaþa, which starts with a team time trial on August 23. The first mountain stage comes after just six days with a summit finish in Granada. The rest of the race presents a plethora of different opportunities which Team Giant-Shimano say their line-up will reflect.

Team Giant-Shimano coach Christian Guiberteau said of the pre-selection ahead of the race: We head into the Vuelta with two real objectives, firstly to help support Warren towards a good overall result in the race. In this we will also help both Warren develop as a leader and also some of the other younger riders in the team to progress in working every day for an overall goal. As well as this we want to target a sprint win but the opportunities for this outcome are few and far between. The team will be built around aiming for these objectives while at the same time focusing on the development that you get from riding a Grand Tour.