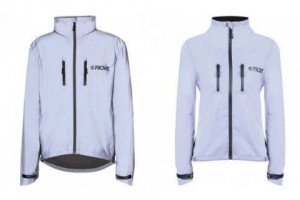 There are any number of cycling jackets available with a decent amount of reflectives built in – would you even consider one without? – but the Proviz REFLECT360 Cycling Jacket really takes things to a whole other level.

Available in both men’s and women’s cuts this arguably isn’t the style of jacket you might train in for speed, but its on-bike uses – from commute to general ride-wear and even MTB or pre-race warmth – are undeniable and, because it’s constructed with a 100% reflective outer-shell it lights up like a beacon.

The REFLECT360 incorporates multiple vents with the underarm/side vents zippered for regulating temperature and when, zipped to the max, the jacket provides credible wind-stopping properties. There’s an inner mesh that holds the shell away from the body, preventing potential clamminess, and two generous, zipped, chest pockets for essentials in addition to a zipped lumbar pocket large enough for route details or maps.

Although initial impressions are of bulk, the 600g jacket feels less weighty on than we had imagined, and the level of comfort impressed. The collar is soft-lined, the cuffs Velcro adjusted with a numb-finger-friendly rubberised tab and the waist fitted left and right with bungee cords for fine-tuning. Even without the exceptional reflective abilities – like Tron on a bike – the REFLECT360 is a more than decent cycling jacket; factor the added safety value in and it quite literally shines.

The Proviz REFLECT360 Cycling Jacket retails at a not-unreasonable Ł79.99 – almost half the price of the similarly reflective, but obviously sleeveless, Nike Flash Gilet – which despite being largely targeted at runners has good application for bike safety too.

Further details and online purchase of the Proviz REFLECT360 Cycling Jacket at provizsports.com