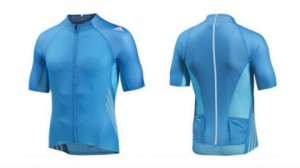 Launched with a storm of publicity and a nifty viral ad campaign the Adidas adiZero Jersey is promoted as the lightest cycling jersey on the market. Whilst it’s unbelievably light, does it really stack up and can they honestly justify Ł120 price tag for it?

Okay, so it’s all about the weight and at just 65g the Adidas adiZero Jersey is around half the weight of a traditional cycling top – that’s impressive to say the least and the adverts made much of this by floating it from a helium balloon. In fact even that visually striking image doesn’t prepare you for the first time you pick it up – it’s like Tolkien’s Mithril. Adidas are understandably coy about what the lightweight mesh material actually is but if you can imagine a cross between nanotechnology Lycra and tissue paper you’re pretty much there.

The back and underarm sides are even thinner mesh for added ventilation whilst rigidity and form comes from the tri-stripe print down either side and the single heaviest feature is the zip. Comfort, it probably goes without saying, is outstanding – mostly because it’s like wearing nothing at all.

Despite the gossamer construction the Adidas adiZero Jersey provides adequate wind protection and arguably enough coverage for a summer ride, although it’s unlikely to make an appearance from the kit cupboard beyond say the end of August. One downside of the material (apart from it’s eye-watering cost) is that it’s ability to wick sweat falls short; there’s just not enough material between skin and air to drawn moisture away and have it blow dry in good time.

Of course cyclists are obsessed with weight (and probably to a greater degree cake) so the Adidas adiZero Jersey will undoubtedly find its market amongst the carbon fetishists. In the weight department it is impressive in every way imaginable and style-wise it ticks the boxes in an equally minimalist, stripped back fashion but beyond height of summer use and perhaps velodrome training and racing the price tag feels tough to defend.

That said, we’re still glad to own one…