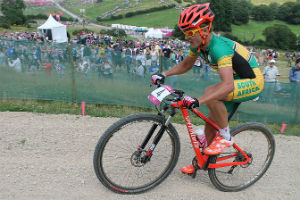 A 24-year-old minibus taxi driver, Njabulo Nyawose, has appeared in court in South Africa following the death of mountain bike star Burry Stander in a road accident last Thursday. According to the South African Press Association (Sapa), the driver faces a charge of culpable homicide or an alternative charge of reckless and negligent driving; after a short hearing he has been ordered to reappear in court on March 22. There have been a number of memorial rides held across South Africa, from Durban and Cape Town to Johannesburg, to pay tribute to Stander – a two-time Olympian and a former Under-19 and Under-23 World Champion – in addition to calls for improved road safety in a country that has reportedly seen more than 1,300 road deaths in the Christmas period alone.

Tragic news for the start of 2013; Burry Stander the South African mountain bike star has been killed in a collision with a taxi near Shelly Beach in the KwaZulu-Natal province. Stander, a two-time Olympian having competed in both Beijing and London, was a former Under-19 and Under-23 World Champion and finished in third place at the 2010 World Championships. It is understood that he was riding with his wife Cherise – herself a professional road racer – when the accident happened.

Pat McQuaid, President of the Union Cycliste Internationale said in a statement that cycling had lost one of its great mountain bike specialists, adding, ‘Burry Stander was a fantastic athlete who had already achieved a great deal and who was destined to go even further. It is tragic that his career has come to such a brutal end. Our thoughts go to his family at this extremely difficult time.’ Fellow South African and Olympic/Paralympic sprinter Oscar Pistorius tweeted ‘Absolutely devastated by the tragic news of Burry Stander’s passing. A South African icon and sporting great. RIP my friend.’