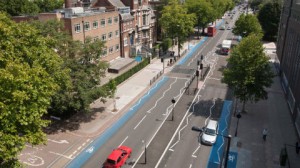 The Barclays Cycle Superhighways in London have been criticised by police giving evidence at the inquest into the death of cyclist Brian Dorling. Dorling, 58, was killed in October 2011 at Bow roundabout (east London) as he cycled to work at the Olympic Park; using the Superhighway to cross the junction he was hit by a lorry turning left and ignoring a red light. The lorry driver, David Cox, was given a suspended six-month sentence after admitting causing death by careless driving, but at the current inquest at Poplar Coroner’s Court PC Simon Wickenden giving evidence suggested that the Superhighways gave a: ‘…false sense of security’ were ‘ambiguous’ and could ‘lead to confusion.’

The coroner, Mary Hassell, recorded a ‘narrative verdict’ on the death and noted it was possible that Mr Dorling had been given a ‘false sense of security’ by the cycle route. Transport for London who manage the Superhighway network are to await the full coroner’s report before responding specifically. Four Barclays Cycle Superhighways are already in operation across the capital, with a further eight to be introduced by 2015. 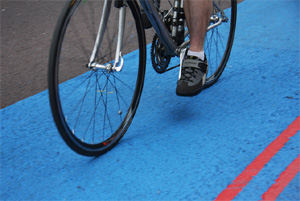 A 50-year-old cyclist has died in a collision with a lorry on the roundabout at the Bow flyover on one of London’s cycle superhighways, a Transport for London spokesman confirmed that this marks the tragic first fatality since the scheme was officially launch in July, 2010. A man has been arrested on suspicion of dangerous driving in connection to the death.

The cycle superhighway scheme, the aim of which is ultimately to create continuous routes into central London for cyclists, was first announced back in 2008 by then-Mayor Ken Livingstone. Four routes are already in operation – Bow to Aldgate, Barking to Tower Gateway, Merton to the City and Wandsworth to Westminster – with 8 more due to come online by 2015.