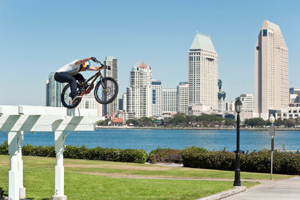 On April 19, 2009, a then 23-year-old Danny MacAskill posted a short video of his street trials skills on YouTube. Produced by his flat mate Dave Sowerby, the ‘Inspired Bicycles’ video attracted several hundred thousand views overnight, has now been viewed more than 28 million times and pretty much changed his life. A raft of publicity followed – including a feature in the New York Times, numerous accolades and a stint as a Hollywood stuntman – he quit his job as a bike mechanic, moved to Edinburgh from his native the Isle of Skye, and began riding fulltime. His latest video ‘Insight 2012’ (presented by new sponsor Lezyne) is destined to be as big a hit as his previous, dazzling, performances – take a look below and visit www.dannymacaskill.co.uk for all the latest news on this incredible cyclist and a chance to look at his extensive back catalogue.