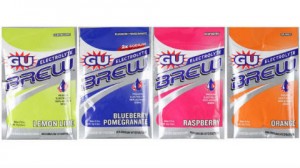 GU launched the world’s first energy gel all the way back in 1991 and for many athletes its outstanding credentials and impressive range of flavours – Jet Blackberry, Lemon Sunblime, Vanilla Bean to name but a few – keep it at the number one spot. And when it comes to sustained hydration during training or racing the equally impressive GU Brew is also worth your attention.

Three of the four available flavours (raspberry, orange, lemon/lime) may seem a little conservative compared to the GU Energy Gel range, but Blueberry Pomegranate adds an unusual twist and all four do a good job of cutting through the slightly salty taste that blights many electrolytes. The flavours are all-natural and you can tell; there’s no bitter chemical aftertaste and they are subtle enough not to overpower.

Taste of course is just one element – and frankly not the most important one – but GU Electrolyte Brew stacks up well where it matters too. Fundamentally an electrolyte drink needs to replace the ‘body salts’ lost during strenuous exercise, when these are depleted the neuromuscular system’s ability to work effectively is compromised and the result (at least the most noticeable immediate result) is muscular cramping. The raspberry, orange, lemon/lime flavours all pack in 327mg of sodium and 52mg of potassium, whilst the Blueberry Pomegranate ups the levels of sodium to 490mg, but cuts potassium to 40mg. There’s not a huge effective difference between these levels for the average athlete, although the added sodium could prove beneficial in more extreme conditions…

In addition GU Electrolyte Brew includes a dual-blend of carbohydrates; the mix of maltodextrin and fructose (‘complex’ and ‘simple’ carbs respectively) is at 2:1, a ratio that is considered optimum for absorption. The dual carbs both provide energy during training and help maximise the absorption in the stomach of both fluids and the potassium/sodium electrolytes. In short they help rehydrate you quicker.

A single 34g sachet makes a larger than average 621ml drink – the rather odd volume probably the result of GU’s American heritage where it would make a far more round-sounding 21floz.

GU Electrolyte Brew is sold in boxes of 16 sachets at Ł41.60 or more reasonable (but perhaps less convenient) canisters containing 35 servings for Ł30.

Further details of GU Electrolyte Brew at guenergy.co.uk and online purchase from, amongst others, chainreactioncycles.com 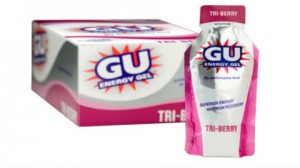 For more than 20 years GU have been at the forefront of the energy gel business and although a few (minor things) have been tweaked here and there they are still largely unchanged since their launch in 1991 – testament to the mantra ‘if it ain’t broke, don’t fix it.’

Don’t be fooled by the somewhat miniscule 32g GU pack size; they deliver 100kcal per serving – equal to many larger gels – from 25g of carbohydrate, a blend of 70-80% maltodextrin and 30-20% fructose (depending on flavour variety.) The mixed carb source has several benefits: fructose absorbs quickly and so goes to work fast, but the gentler on the stomach maltodextrin – a starch derivative – absorbs slower for sustained energy but still quickly enough not to shunt blood away from otherwise preoccupied muscles. Combined, the fructose and maltodextrin provide a steady energy source without the peaks and troughs of simple sugars. To aid carb absorption and to help fight off muscle fatigue each serving also contains 450mg of amino acids in addition to sodium and potassium to counter ‘body salts’ lost through sweat.

GU also offers a wide range of flavours – Jet Blackberry, Chocolate Orange and Cyclo’s favourite Vanilla Bean amongst them. All of the flavours are well balanced (tasty without being overpowering) and the consistency is closer to a paste than most gels, which takes some getting used to and does require a swig from the bidon to wash down.

GU certainly delivers on the energy front and those with sensitive stomachs should benefit from the maltodextrin biased carb content, flavour range means there is (probably) something for everyone and their tiny packet size – half of a Maxifuel Viper for similar energy delivery for example – means there is less bulk in the jersey pocket. As the makers say: ‘Just suck down a packet of your favourite flavour and go (big)!’

GU Energy Gels are Ł36 per box of 24, further details and online purchase from GUEnergy.co.uk