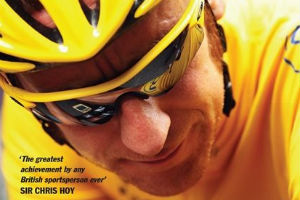 Hard to move without bumping into another book on Bradley Wiggins – his autobiography, My Time, is out, as is an update of his In Pursuit of Glory, and the official Team Sky’s 21 Days to Glory. Then there are the books Richard Moore, Daniel Friebe, Press Association Sports, et al. Britain’s first ever Tour de France winner and Olympic hero is certainly proving a gift to publishers… We have to assume the collective noun for these is ‘a peloton’ and amongst this bunch we find Bradley Wiggins: Tour de Force by John Deering, a regular contributor to Eurosport’s cycling coverage, Procycling and The Official Tour de France Guide. The fact that Deering has arguably nabbed the best title for his book reveals something of the tabloid headline nature of his book, but where it succeeds is in perfectly balancing biographic history with a virtual day-by-day account of Wiggins’ 2012 Tour de France battle, thus splicing together several of the other viral titles available.

Deering pulls off his trick by alternating chapters between breathless present tense details of the TdF with stories of Wiggins’ childhood and rise through the ranks. Whilst the latter is really better detailed in Wiggins’ own books and words, Deering’s blow-by-blow of the Tour is both evocative and perfect for those looking to learn more about the machinations of team tactics and minutiae of life on the road. If you can forgive the tabloidisms (‘He kisses the podium girls with the relaxed confidence of a former lover’) then Tour de Force is a rewarding read that ranks amongst the best on its subject.