Having won the Amstel Gold Race last Sunday (April 17) and followed it up with an even more decisive victory at the Flčche Wallonne on Wednesday (April 20) the pressure was certainly on Omega Pharma-Lotto’s Philippe Gilbert at the start of today’s Liege-Bastogne-Liege. But clearly not one to buckle under such scrutiny the Belgian smashed his way to triumph over the 255.5km course to make it three for three Ardennes Classic victories; he finished in a time of 6:13:18, out-sprinting brothers Frank and Andy Schleck (both Team Leopard-Trek), who had to settle for second and third respectively.

The impressive win makes Gilbert the first Belgian to win the Liege-Bastogne-Liege since 1999, the first Walloon to win since 1978 and only the second man ever to win the Ardennes hat-trick. 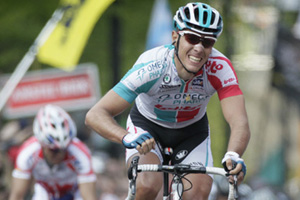 Omega Pharma-Lotto’s Philippe Gilbert has won the 46th edition of the Amstel Gold for his second consecutive victory. The Belgian clocked a time of 6:30:44 over the 260.4km course to beat out Joaquin Rodriguez of Katusha (+0:02) into second and Sky’s Simon Gerrans (+0:04) into third. 190 riders made the start in near perfect conditions to head out and tackle the infamous 32 climbs of the course but Gilbert (a surprise winner for many last year) looked determined from the start to take advantage of what is, virtually, home turf. Interviewed recently about this challenging one-day classic Gilbert commented: “I consider the Amstel Gold Race as one of the most beautiful classics, but also as one of the most dangerous. You should therefore always be very careful when riding it.”