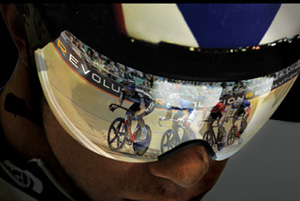 With a stellar line up of cycling’s cream Saturday’s Revolution Series at the Manchester velodrome was being hailed as the greatest ever well in advance of a single saddle being taken to. And it certainly lived up to the hype with the likes of Mark Cavendish, Franco Marvulli, Geraint Thomas and Ed Clancy lining up for the off. Despite Ed Clancy and Andrew Tennant winning the 1km Madison time trial it was World road race champion Mark Cavendish, making his first track appearance since the 2009 World Championships, that stole the lion’s share of the limelight winning the scratch race ahead of Steven Burke and in front of a capacity crowd. Cav took the 15km event in 17minutes flat with Team Sky’s Alex Dowsett and Geraint Thomas only making 15th and 18th place respectively.

Recently-retired pro, and long-time Revolution Series favourite, Rob Hayles was welcomed with a standing ovation from the 4000-strong audience and fellow riders alike. Highlights of the event will be televised today (Monday, November 21) at 7pm on ITV4.

For full details of the Revolution Series see: www.cyclingrevolution.com

Rob Hayles, the long-standing British star of both track and road, has announced that he is set to retire after his forthcoming appearance at he 2011 national hill-climb championships, which is be held this coming Sunday (October 30) at Long Hill near Buxton. Hayles became rider/manager of Endura at the start of the 2010 season after a distinguished career that began with the 1993 national kilometre title and led to Olympic track medals at both the 2000 and 2004 games, the British road race title in 2008 and both the 10 and 25mile time trial titles.

The 38-year-old made the announcement via Twitter, saying: “After nearly 27 years of racing, 19 of those full time, and 16 as a professional, I have had an amazing time. But I feel it’s now time to concentrate on other very exciting things I will be doing in the future.”