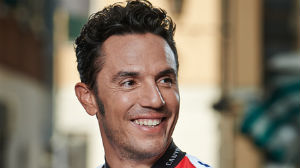 Katusha’s Joaquim Rodriguez has confirmed he will ride the Tour de France despite the fact it had not originally been scheduled as part of his season. Rodriguez, who finished third at last year’s TdF, has not had a good year so far having been one of the victims of the infamous Stage 6 at the Giro d’Italia, abandoning after his crash with fractures of a rib and thumb. Commenting on his recovery the Spaniard said: ‘My rib still hurts a bit, but already there is much less pain than in the beginning. It gets better every day and we still have three more weeks until the Tour.’

In a statement from Katusha Rodriguez continued: ‘I really wanted to perform well in the first part of the season. I had big ambitions but my crashes in the Amstel Gold Race and the Giro ruined my chances for the classics as well as for the first Grand Tour of the season. The other goal I put in place at the beginning of the season, the Tour of Spain, is still there. The course suits me and I want to win that race. This does not mean that I go to the Tour de France as preparation for the Vuelta. I have Tour ambitions too, though not for the GC. The third week looks nice and I want to win one or more stages. I have that goal and in the mean time I will enjoy my bike. Otherwise it would be hard to watch TV without being there. It hurt during the Giro and it would hurt in the Tour, too. Those races are ‘my’ races. It’s only when I watch races like Paris-Roubaix on TV that I don’t have the feeling that I’m missing something.’

The full Team Katusha roster for the Tour de France is not yet finalised.

Full details of Team Katusha and Joaquim Rodriguez at katushateam.com and of the Tour de France at letour.com 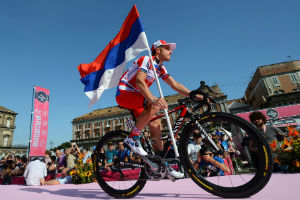 Compression brand Compressport have announced a new partnership with UCI Pro Tour Team Katusha; the Russian-based squad will now wear a limited-edition range of products, which have been manufactured in the team’s official colours. During racing (including at the current Giro d’Italia) Katusha will wear Compressport’s new Bike Pro Racing Socks, whilst off-event the team will wear both the Pro Racing Armsleeves and Leg Sleeves for training and recovery and the company’s Full Socks for travelling. Viatcheslav Ekimov, Katusha Team’s General Manager, commented: ‘Katusha is very proud to work Compressport… The whole Katusha Team is looking forward to collaborating with Compressport to develop the most advanced cycling racing socks and compression products.’

Tim Williams, the UK distributer of Compressport added, ‘We are delighted to be able to announce this partnership. It demonstrates that our products help cyclists to perform better, whether this is our Bike Pro Racing socks that have been developed specifically for cyclists or our full socks that are used by athletes from all sports to help them recover more effectively between races. We are already working with one of the world’s leading MTB riders, Sally Bigham, and this demonstrates our further commitment to cycling.’

Read our review of the Compressport B.Sock ProRacing Sock here and the F-Like Full Legs here. 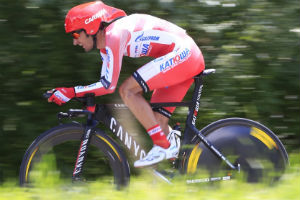 After weeks of wrangling the UCI has now officially confirmed the registration of Team Katusha as a professional continental team. Problems for the Russian squad first surfaced last December when Saxo Bank-Tinkoff Bank were awarded their ProTour licence for 2013, despite effectively having failed the qualifying criteria, leaving Katusha inexplicably unplaced despite finishing in the Tour standings in second spot behind Sky. The UCI economically and enigmatically stated: ‘The request from the team Katusha for registration in the first division has been rejected.’ Katusha launched a fierce and very public campaign to regain their standing and seek clarity over the situation; as things stand they have now received the second division license and are waiting for the final decision of the Court of Arbitration for Sport (CAS) in order to obtain the full UCI World Tour/ ProTour license for 2013.

The UCI award team points for ProTour status based, in part, on the performance of the top 12 riders and results from the two previous years although the exact criteria remains somewhat shrouded in mystery.

As we reported yesterday (December 11) Saxo Bank-Tinkoff Bank has been granted a ProTour licence for 2013, but at the seemingly inexplicable expense of Katusha, whose own application was declined by the International Cycling Union (UCI) despite the Russian team finishing second, behind Team Sky, in this year’s Tour standings. With much mystery still surrounding the decision – and with the UCI rather unhelpfully commenting only that ‘The request from the team Katusha for registration in the first division has been rejected.’ – it is reasonable to say that Katusha are a little unhappy with the state of affairs.

In a strongly worded press release Katusha stated both their amazement and anger over the decision: ‘At (the) present moment Katusha Team has no information regarding the reasons for the decision of the UCI to reject the request from the team for registration in first division. Team management, riders and staff are extremely surprised by the lack of justification for such a decision made by the UCI… In fact the only Russian team, where the majority of riders are Russian citizens, has been excluded from participation in races of the World Tour. Thus, this decision of the UCI has suspended Russia as a country from participation in cycling competitions of the highest level.’

Clearly not prepared to simply roll over, the team’s statement continues, ‘In the nearest future the management of the Russian team Katusha intends to investigate thoroughly this incident, first of all in order to give all possible explanations to the riders and staff of the team, as well as to choose a future strategy. In addition, the Katusha Team is not retreating from the plans that have been made for the next season and is preparing for the official team presentation, which is scheduled for mid-December 2012 in Italy.’

And as if that was not fighting talk enough, they conclude: ‘The Russian team intends to defend its interests with the help of all possible civilized instruments and methods, including going to court…. Katusha is ready to fight and is stronger than ever.’ Cyclo, will keep you posted. 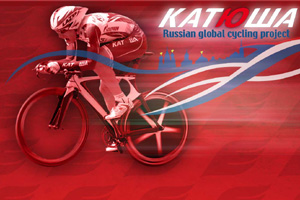 Saxo Bank-Tinkoff Bank has finally been granted a ProTour licence for 2013. There had been fears that next year’s biggest races would not feature Saxo-Bank and their star rider Alberto Contador, after the Danish team failed to make the grade for their WorldTour licence, leaving them fighting for wildcard places and individual invites to the Giro d’Italia, Vuelta a Espana and Tour de France.

However one teams gain is another’s loss, as Saxo-Bank’s place has only now been guaranteed because Russian team Katusha has had their ProTour status declined by the International Cycling Union (UCI). Something of a mystery surrounds Katusha’s failure to make the grade (they finished second in the Tour standings this year behind Team Sky) with the UCI economically and enigmatically stating, ‘The request from the team Katusha for registration in the first division has been rejected.’

The UCI award team points for ProTour status based, in part, on the performance of the top 12 riders and results from the two previous years although the exact criteria remains somewhat shrouded in mystery. Saxo Bank had initially found themselves lacking in no small part due to Contador’s ban for clenbuterol use.

Katusha’s Joaquim Rodriguez has dazzled crowds once more on Stage 12 of the Vuelta a Espańa (190.5km Vilagarcía de Arousa – Mirador de Ézaro) with a spectacular win at the end of the gruelling 2km, 13% gradient, Mirador de Ezaro. Alberto Contador (Saxo Bank-Tinkoff) made a valiant effort to attack Rodriguez’s lead, but ultimately had to settle for second, with Movistar’s Alejandro Valverde placing third. Rodriguez’ total time of 44:50:35 keeps him in overall lead with 9 stages left to run until the action culminates on the streets of Madrid on September 9.

Commenting on his Stage 12 win, Rodriguez said, ‘I’m very happy to be still in red jersey and to improve the gap, but nothing is still decided: the competition is still long, with very hard stages, and everybody can have a bad day and drop, coming out of the fight for general classification. I’m very happy, my shape is great, people supports me a lot: I will try for sure to keep the jersey until Madrid, even if it will be difficult.’

The Vuelta continues today (August 31) with the 172.8km leg from Santiago de Compostela to Ferrol. 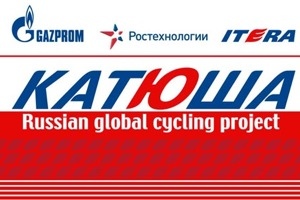 Katusha have formally announced their team for the Tour de France. Led by the Sport Directors Valerio Piva, Dmitry Konyshev and Torsten Schmidt, the riders will be: Giampaolo Caruso, Oscar Freire, Vladimir Gusev, Joan Horrach, Aliaksandr Kuchynski, Denis Menchov, Luca Paolini, Yuriy Trofimov and Eduard Vorganov. Menchov, who will lead the team, said, ‘The team is great; we selected the riders very carefully, I talked a lot with the Sport Directors, so I think that’s the best possible team having in mind our shape and the profile of the competition. We have good domestique’s, and Freire during this season proved to be in a good shape. I’m very satisfied with the final roster, and I’m sure we will obtain some great results’ and on the subject of his own ambition? ‘it will be my first big stage race with the team of my country, so I’ll give my best in order to win. Moreover, the Tour de France is the only competition between the Grand Tours that I still haven’t won… it would be the crowning achievement of my career…’

Team Katusha have announced that their bid at the Santos Tour Down Under, the South Australian event which really kick-starts the pro-cycling season (January 15-22) will be lead by three-times World Champion Oscar Freire. Commenting on the news Race Director Mike Turtur said: “Spaniard Oscar Freire has accomplished what only legends like Alfredo Binda, Eddy Merckx and Rik Van Steenbergen have been able to do: win three World Road Race Championships (1999, 2001, 2004). His other impressive results include winning the Milan to San Remo three times (2004, 2007 and 2010) as well as several Grand Tour stages.”

In addition the Spaniard is also a four time TdF stage winner, a winner of the TdF Green Jersey (2008) and winner of seven stages of the Vuelta a Espana. The Russian team’s line-up will also include Xavier Florencio, Giampaolo Caruso, Eduard Vorganov, Maxim Belkov and Luca Paolini.