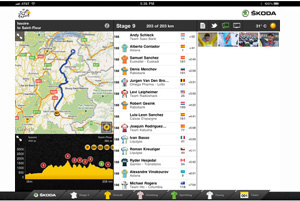 Just imagine a Tour de France app that offers up live minute-by-minute race updates, live GPS tracking on stage maps and course profiles, highlight videos, results and standings, rider profiles and much more. Well keep imagining, because the app from developers ASO (Amaury Sport Organisation) fails on almost every level. In principle it looks solid enough, but the problems for Cyclo started at about the same time as the race started – although the 2011 event was clearly underway the app’s countdown still had some way to go. Once the tech had finally caught up with real events the commentary feed proved well written and had a friendly, personal tone and is far and away the app’s most successful feature. Unlike Stage 1 though, it was all downhill for the Official Tour de France App 2011 from here.

For a start the suggestion of “live GPS tracking” is rather (probably not intentional) misleading. Don’t you think we would have heard of individual riders were going to be sporting trackers? Well the reason we hadn’t heard that is simply that they don’t. Instead the tracking is provided by support vehicles which then feed accumulated data back to official Tour de France servers from where it is syndicated to various media and technology organisations. But this “little white lie” isn’t the big problem with the ASO app – the integration of data is poorly handled, it lacks intuitive navigation and the rate of software crash is marginally higher than a badly clustered peloton; in fact Day 2/Stage 2 saw the app fail so frequently that it barley ever got past the Skoda splash-screen advert. Cyclo clearly isn’t alone in experiencing such catastrophic app failure either if feedback on the Apple store is anything to go by: “…all it does is crash at the first page.”, “Very poor, crash, crash, crash..”, “Avoid!”, “Skoda should be ashamed.”

On the off-chance that you can get the app to run it might have been a nice touch to include details of up-coming stages (or indeed the opportunity to go back and revisit previous ones) but here again ASO fail miserably. It really is hard to find anything good to say about the product and its failure is made all the more disappointing when you consider what a wasted opportunity this is. The world’s greatest cycling event really does deserve a world-class app to support it and this is certainly far from that. Remember these succinctly wise words: ‘Avoid!’ 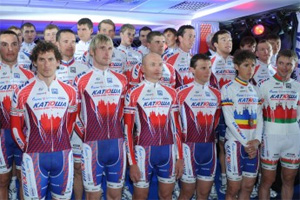 Team Katusha have made something of a surprise announcement with the news that they will be racing a 100% Russian field at this year’s Tour de France which starts on Saturday July 2. This marks the first time in the race’s history that this has happened and means that neither Spain’s Joaquim Rodriguez (eighth in the 2010 Tour) nor Italy’s Filipppo Pozzato will be taking to the saddle for their team.

Team Manager Andrei Tchmil (himself a five-times Tour participant) explains, “Being at the Tour de France is always something to be proud of. But being there with an 100% Russian team represents, in the sporting point of view, an historical event.” Although Tchmil readily agrees that the decision will put the squad “under the spotlight”, his approach remains predictably aggressive: “The main goal, as always, is to be protagonist. Our performance, when we´ll cut the finishing line in Champs Elysees, won´t be judged by wins, but instead by the courage and the commitment we put in every single stage”.

The origins or the Tour de France are as arcane and convoluted as they are typically Gallic; everything from the Folies Bergčres to novelist Emile Zola and the socialist Jean Jaurčs make an appearance in a story that has grown and become mythologized since the race was first staged in 1903. But what it comes down to, in simplistic terms, is this: The race was the brainchild of Henri Desgrange, the Parisian editor if sports magazine “L’Auto-Vélo” who, in a bid to boost circulation, staged the first Tour with just 60 riders in attendance. By the 1920s the race had grown to more than 100 competitors from across Europe and the foundations of the Tour we know today as the greatest stage cycling race in the world were laid. The Tour de France 2011 (the 98th) begins on Saturday July 2 running through to Sunday July 24, comprises 21 stages and will cover a total distance of 3,430.5k on a course that Christian Prudhomme (Director of the Tour de France) has described as being: “…determined with two objectives in mind: to set the pace from the beginning of the race and maintain suspense right up until the very end…” As always the Tour will comprise a variety of disciplines which this year breaks down as – 10 flat stages, 6 mountain stages (with 4 summit finishes), 3 “medium” mountain stages, 1 Individual Time-Trial stage (July 23, 42.5km, Grenoble) and 1 Team Time-Trial stage (July 3,23 km, Les Essarts).

If you’re looking to educate/entertain/bored (delete as applicable) your friends, Cyclo suggests you try one or more of the following Tour-factoids:

* Just four riders have one the Tour five times: Jacques Anquetil, Eddy Merckx, Bernard Hinault and Miguel Indurain. Of these, only Indurain achieved five consecutive wins – 1991-1995.
* Seven riders have won the Tour de France and the Giro d’Italia in the same year: Marco Pantani, Stephen Roche, Jacques Anquetil, Miguel Indurain, Bernard Hinault, Fausto Coppi and Eddy Merckx, who achieved a record three double-victories in 1970, 72 and 74.
* France has won the most Tours (36), followed by Belgium (18) and Spain (13)
* The youngest Tour de France winner was Henri Cornet, aged 19 (1904).
* The oldest winner was Firmin Lambot, aged 36 (1922).
* Only four competitors have died during the history of the Tour – Fabio Casartelli (1995), Tom Simpson (1967), Francisco Cepeda (1935) and Adolphe Heličre (1910); however Heličre actually died during a rest day when he drowned.

Okay so the Giro d’Italia isn’t quite over yet and is still serving up the expected thrills and we have plenty of other two wheeled action on the horizon (including the Tour of Luxembourg June 1-5) but here at Cyclo we can never contain our excitement about the Tour de France. So, without apology, and ahead of next month’s main feature on the event, here is a little taster of what to expect. From Saturday July 2 the 98th Tour runs over 21 stages with just two rest days – July 11 and 18 – covering approximately 3,470k of action but, this year, including only two Team Time Trial sections (totaling just 64k) made up of Stage 2 (23k) on July 3 at Les Essarts and Stage 23 (41km) at Grenoble. There are also three Medium and six High Mountain stages to be tackled before glory at the classic Champs-Élysées finish.