During both the Tour de France and USA Pro Challenge, which ran this year between August 19 and 25, Cyclo brought you the unique take on events by artist Greig Leach, a one-time amateur club bike racer, participating in the DC and Richmond, Virginia areas of the US. We’re delighted to welcome Greig back with his work from this year’s Tour of Britain. Enjoy…

Stage 1 – ‘Punching the Air’ – A wet start to the Tour, but it was a rider from the sunny climes of Italy, Elia Viviani, that took the opening sprint in the cold. 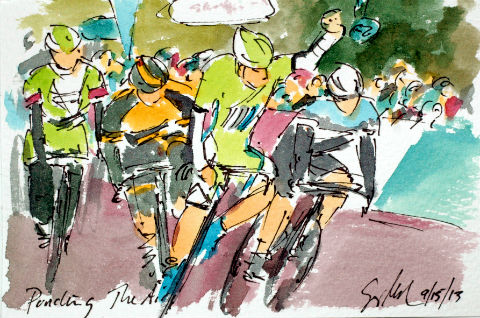 Stage 2 – ‘I Know They’re Back There’ – Dan Martin and Nairo Quintana along with another Moviestar team mate, jumped away from the rest of the peloton on the final categorized climb of the day in hopes of repeating their exploits of the Tour de France. 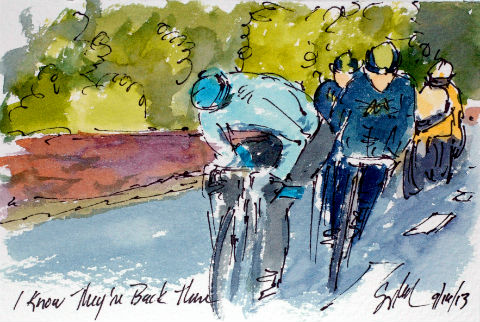 Stage 3 – ‘Making the Catch’ – The Individual Time Trial: Bradley Wiggins took the opportunity to reclaim the glory and form of 2012 along with the stage and ultimately the Yellow Jersey of race leader of the Tour of Britain. 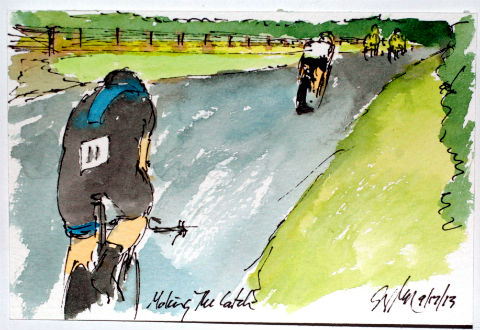 Stage 4 – ‘One at Home’ – Cav taking his first stage of the Tour wearing the British National Championship jersey. 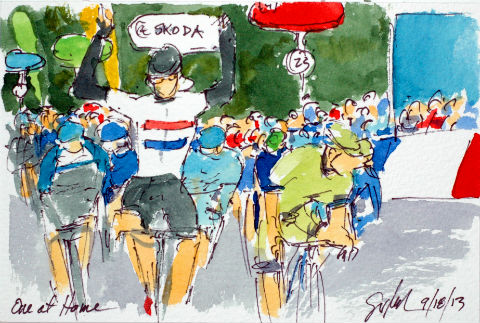 Stage 5 – ‘Swinging Off’ – Jacob Rathe, has just swung off putting, Angel Madrazo on the front as they fly past the council flats of Caerphilly and the final climb of the day. 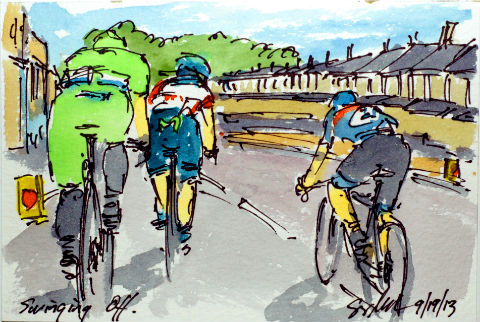 Stage 6 – ‘Leaving Them All Behind’ – Climbers as Dan Martin and Nairo Quintana ran out of gas when Team Sky sent Lopez after stage glory; but it was the local boy, Simon Yates that had the legs to go the distance on stage 6 in the county of Devon. 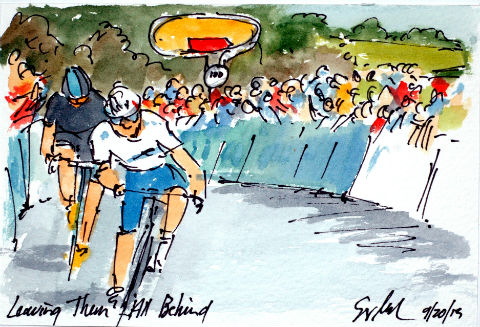 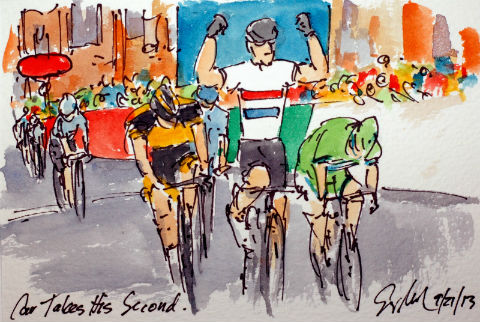 Stage 8 – ‘Showing the Jersey’ – Wiggins came into the Tour of Britain with the intention of winning the race and preparing himself for the World Championships. With all of the hometown fans lining the course he made sure to get out in front of the peloton and let everyone see the IG Golden Jersey of race leader 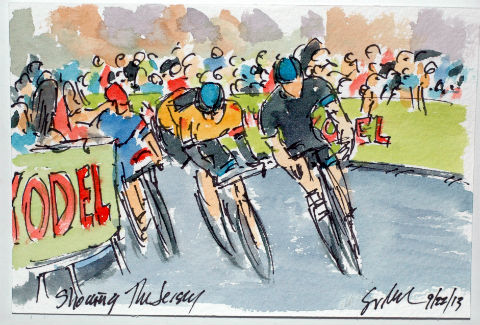 To learn more about the work of Greig Leach and for details of his substantial output from this year’s races see greigleach.com and also theartofcycling.blogspot.com – he is sponsored by Richeson Art, and for an overview of all the work we have featured on Cyclo (including this year’s Tour de France and USA Pro Challenge) click here. 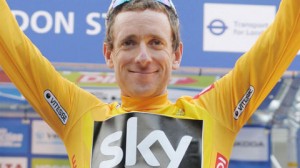 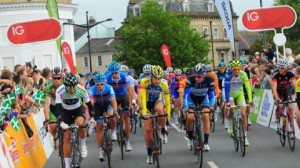 The lineup for the tenth anniversary Tour of Britain has been announced with the largest field to date comprising 19 teams and 114 riders taking on the eight stages starting in Peebles in the Scottish Borders on September 15 and ending in London on September 22. There is a good showing of 2013 Grand Tour teams including Sky Pro Cycling, Movistar and Garmin-Sharp, plus Milan San Remo winning team MTN Qhubeka and UCI Continental Teams Madison Genesis and Rapha Condor JLT.

Race Director Mick Bennett comments, ‘This year’s Tour of Britain will have a world-class line-up bringing a number of international stars to race on British roads, while at the same time allowing our top domestic teams and a Great Britain squad to race on the biggest stage possible for them… The make-up of teams will provide another exciting and unpredictable Tour from a racing perspective, whether you are watching at the roadside or at home on the live television coverage.’ Both ITV4 and British Eurosport will be serving up live coverage across the eight days of action and there is also an opportunity for amateur cyclists to take part in The Tour Ride Scotland on Saturday September 14 with a choice of 50- and 100mile routes (see thetour.co.uk for details.)

Participating teams for the tenth anniversary Tour of Britain are: 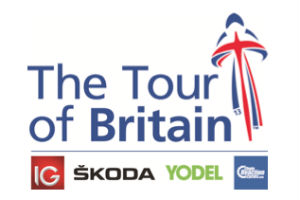 The 10th anniversary of the re-launched Tour of Britain – which runs September 15-22 – will feature, according to organisers, the ‘hardest ever route’, and with tough double climbs of Caerphilly Mountain and the Tour’s first ever summit finish amongst the highlights it’s easy to see why. The Scottish Borders will host the start with the 201km leg from Peebles to Drumlanrig Castle, with riders finishing almost 1,200km later in London; the longest stage (225km) comes on day two, Carlisle to Kendal, whilst the 16km Individual Time Trial is set for day three at Knowsley Safari Park and the much anticipated summit finish comes on day six atop Haytor in Dartmoor.

The Tour of Britain is the UK’s biggest professional cycle race and the country’s largest free-to-watch sporting event; after a five-year absence from the calendar it returned in 2004 organised and promoted by sports marketing and events company SweetSpot. Commenting on the 2013 event Hugh Roberts, chief executive of SweetSpot said, ‘This year’s Tour will be an exciting and dynamic route, building on the success of last year’s race and celebrating what has been an incredible ten years of growth for The Tour of Britain and cycling in the UK.’ With ToB race director, Mick Bennett, adding, ‘This will definitely be the most challenging Tour of Britain yet,’ the full schedule is:

Another first for this year is the planned one-day women’s race set for London ahead of the final which will take place over the same 8.8km circuit of the capital on which the men will compete. Whilst the final day of the ToB will see a ten-lap circuit the distance for the one-day women’s event is yet to be agreed or made public.

If the action across the eight days of competition looks likely to be thrilling, there are already plenty of machinations behind the scenes with news that the owner/organisers of the Tour de France, Amaury Sport Organisation (ASO), have officially confirmed an interest in running future editions of the event. ASO organise not only the Tour de France but also a number of other high-profile cycling events including Paris-Roubaix, Critérium du Dauphiné and Vuelta a Espańa; speaking to the BBC the company’s president Jean-Etienne Amaur has finally come close to expressing explicit interest, saying: ‘It’s something we’re looking into right now but I can’t say too much about it… but if we can make it into something even more compelling for TV and spectators then we’d go for it.’

Despite the fact that the ToB has been organised by SweetSpot since its re-launch in 2004, British Cycling announced last year that it would be putting the contract for the Tour out to open tender in order to explore wider options in raising the profile. Speaking at the time British Cycling’s president, Brian Cookson, said he wanted to take a ‘…fresh look’ at how the ToB could better ‘…reflect the current status of our sport in this country.’

If neither SweetSpot nor Amaury did move forward with plans for the ToB another (somewhat outside) option could be ASO’s Italian rivals RCS Sport, organisers of the Giro d’Italia; in any event a decision on who will run the ToB from 2014 onwards is expected to be made before September, ahead of this year’s race.

For further information and all the latest news see thetour.co.uk