Marcel Kittel has won the opening stage of the Tour of Britain with a sprint finish at the conclusion of the eight-lap, 104.8km start in Liverpool, narrowly beating Nicola Ruffoni into second and Mark Cavendish into third. Team Giant-Shimano’s Kittel, who won two of the Grand Depart stages of this year’s Tour de France finished in 2h 16’35” commenting: ‘It was really messy at the finish – it’s always difficult when you have a downhill section in the final kilometre as it becomes really fast and harder to hold position… It’s good to win the first stage. It’s really nice to see the reaction of the spectators here – a lot of people came out to the race today.’

Cavendish was, in many respects, lucky to take a podium place at all having crashed into a car at just under the 105k point prompting flash-backs of his disastrous Tour de France opener. The Omega Pharma – Quick-Step rider said of the accident: ‘I had to change my cleats in the beginning of the stage; I was coming back after and I was behind a car. Someone had to stop for a puncture so the car slammed on its brakes, and there was an island in the road. If I went right, I would hit a traffic island, so I went left and I whacked another car. I hit it with my left leg and I was down on the road. I felt immediately a lot of pain on my quadriceps. It took me a lap to come back even because our team car couldn’t assist me immediately because it was on the front.’

Defending Tour of Britain champion Bradley Wiggins, hoping to become the first rider to win successive titles since the race was reintroduced in 2004, finished in the peloton in 74th place.

The Tour of Britain continues today with the 200.8k stage from Knowsley to Llandudno. Full details at tourofbritain.co.uk 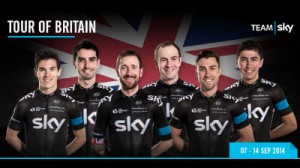