The BMC squad of Brent Bookwalter, Taylor Phinney, Michael Schär, Lawrence Warbasse and Greg Van Avermaet have won the second stage of racing at the Tour of Qatar (the Team Time Trial) in a time of 16:07. BMC ultimately managed to outclass Team Sky across the second half of the 14km Al Rufaa Street course to keep them in second place (+5seconds), with the BMC win seeing the overall lead position of Bookwalter – who went clear to win Stage 1 on Sunday – extended to 6seconds. Going into today’s Stage 3, 143km Al Wakra to Mesaieed, Bookwalter’s teammates Taylor Phinney and Adam Blythe sit in second and third place respectively. BMC Racing Team Assistant Director Jackson Stewart said specific practice for the Team Time Trial during last month’s training camp in Spain had paved the way for yesterday’s success; commenting ‘We had our rotations down and I thought we did everything perfectly. We only lost Steve Cummings, Adam Blythe and Yannick Eijssen at the end…’
Further details on the official race website letour.com 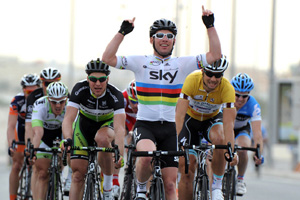 Just a couple of days after being taken ill on his flight out to Qatar, Marc Cavendish was back on blistering form today taking his first win for his new team, Sky. Making his debut outing in the World Champion’s jersey, Cavendish and team-mates Bernhard Eisel and Juan Antonio Flecha worked their way into a lead group of just over 30 riders when the peloton was split into three by crosswinds with 30 kilometres remaining in the 146.5km stage from Dukhan to Al Gharafa Stadium, but by the uphill finish it had turned into a head to head between the World Champion and race leader Tom Boonen of Omega Pharma-Quick Step. Cav produced his trademark burst of acceleration to land the spoils by just over a bike length from Boonen, with Aidis Kruopis taking third. The victory puts Cavendish third in the overall standings, eight seconds behind Boonen.

Speaking afterwards Cavendish said: ‘I’m very happy with that. I’m still not 100-per-cent but we wanted to ride well as a team and if it came down to a sprint then it came down to a sprint. It split up which we weren’t really expecting but the wind picked up and I was looked after by the lads who got me to the front group…It’s incredible to win (with the rainbow jersey). I said I wanted to make the jersey proud. You never really get the season going until you get that first win under your belt. So now it’s there I can hopefully get on a roll now.’ 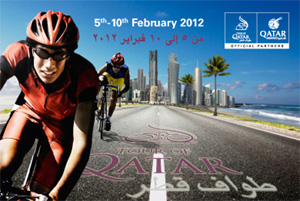 Stage 2, the 11.3-kilometre Team Time-Trial, of the Tour of Qatar was won yesterday (February 6) by Garmin-Barracuda which saw their riders rise up the general classifications despite three-time winner Tom Boonen of Omega Pharma-Quick Step continuing to hold top spot. Boonen, the winner of Stage 1 – the 141.5 km route from Barzan Towers to the College of the North Atlantic – retained the leader’s Golden Jersey although Garmin-Cervélo’s Tyler Farrar now holds a spot-on identical time for second place. The Tour of Qatar continues today with the Dukhan to Al Gharafa Stadium 146.5 km route and concludes on February 10.

Team Sky fans will (probably) be breathing a sigh of relief after something of a roller coaster weekend of news leading up to Mark Cavendish’s début for his new squad at the Tour of Qatar. It was initially reported that he had been taken ill on the flight out to the Middle East state on Friday evening and then that he had sat out Saturday’s training day after consulting with the team medical staff. In an official statement Team Sky’s Race Coach Rod Ellingworth said: ‘Obviously it’s disappointing that Mark has fallen ill the day before his Team Sky debut. He felt fine when he boarded the plane last night but wasn’t 100% when he got off it…He’s really frustrated that he’s come down with this because he’s in great shape condition-wise and was looking to hit the ground running here in Qatar.’

Better news greeted fans on Sunday morning (February 5) with a statement from Team Sky’s Sports Director Steven de Jongh saying: ‘We’re all delighted that Mark has been able to battle back from the bug he picked up coming out here and it will be a real boost to the rest of the guys to know that he’ll be starting today. Our medical team have done a fantastic job in looking after him and Mark has followed their advice to the letter. Clearly, he’s not going to be at his best in the next few days but we’re hoping he’ll get stronger with every passing stage… We’ll continue to keep a very close eye on him but hopefully he’s over the worst of it now.’

And so it was that Cav took to the Stage 1 route (141.5km, Barzan Towers College of the North Atlantic), understandably sitting back from the sprint but finishing 51st with former world champion Tom Boonen of Omega Pharma-Quick Step taking the win. Bated breath is still required for today (Monday February 6) as he heads out for the 11.3km Sprint Stage…